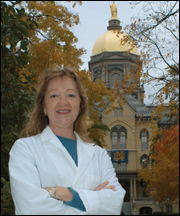 Joan F. Brennecke,Keating-Crawford Professor of Chemical and Biomolecular Engineering and director of the University of Notre Dames Energy Center, has been named the 2008 Julius Stieglitz Lecturer by the Chicago section of the American Chemical Society (ACS) and the University of Chicago.

The award, presented since 1940 in honor of Stieglitz, is the highest ACS section award given. This years lecture is scheduled for Nov. 19 at the University of Chicago.

As the 2008 lecturer, Brennecke joins the list of lecturers that includes 13 Nobel Laureates and more than 35 members of the National Academy of Sciences, including Linus Pauling, Robert B. Woodward, Herbert C. Brown and George Whitesides. She is the first chemical engineer to be honored.

A faculty member since 1989, Brennecke is internationally known for her research in the development of solvents, specifically supercritical fluids and ionic liquids. Her research interests include supercritical fluid technology, ionic liquids, thermodynamics, environmentally benign chemical processing, and carbon dioxide separation, storage and usage.

Brennecke has received numerous awards for her research, as well as for her contributions in the classroom. Most recently, she was presented with the 2007 John M. Prausnitz Award for outstanding achievement in applied chemical thermodynamics by the Conference on Properties and Phase Equilibria for Product and Process Design. In 2006 she received the Professional Progress Award from the American Institute of Chemical Engineers (AIChE).

She also received the 2001 Ipatieff Prize from the ACS in recognition of her high-pressure studies of the local structure of supercritical fluid solutions and the effect of this local structure on the rates of homogeneous reactions. In 1991, the National Science Foundation honored her with the Presidential Young Investigator Award.

Brennecke is a member of AIChE, the ACS and the American Society for Engineering Education. She is past chair of the Council for Chemical Research and currently serves on the editorial board of the journal Green Chemistry.

Stieglitz was a U.S. chemist who interpreted the behavior and structure of organic compounds in the light of valence theory and applied the methods of physical chemistry to organic chemistry.