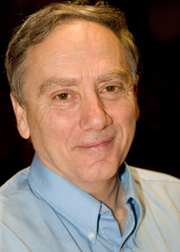 Mario Livio, senior astrophysicist and head of the office of public outreach at the Hubble Space Telescope Science Institute (STSci), will present a lecture titled"Is God a Mathematician?"at 7 p.m. Wednesday (Jan. 21) in the Carey Auditorium of the University of Notre Dame’s Hesburgh Library. The lecture, which is free and open to the public, is sponsored by the University’s Department of Physics.

In a book with the same title as his lecture, Livio notes that for centuries mathematical theories have proven uncannily accurate at describing and predicting the physical world. During his talk, he will examine what it is that gives mathematics such powers.

Livio’s lecture will span such fields as cosmology, physics and the cognitive sciences, and will offer an accessible and lively account of the lives and thoughts of some of the greatest mathematicians and scientists in history, from Archimedes to Galileo and Descartes, and from Newton to Goedel. He also will discuss whether mathematics is ultimately invented or discovered.

Livio received his doctorate in theoretical astrophysics from Tel Aviv University and served as a professor in the physics department of the Technion-Israel Institute of Technology from 1981 to 1991, when he joined STSci. His interests span a broad range of topics in astrophysics, from cosmology to the emergence of intelligent life. He has published more than 400 scientific papers and is a frequent lecturer at such venues as the Smithsonian Institution and the Hayden Planetarium. Livio is the author of three previous books:“The Equation That Couldn’t Be Solved,”“The Golden Ratio,”and"The Accelerating Universe.“He will be signing copies of”Is God a Mathematician?"at 6:30 p.m. in Carey Auditorium.