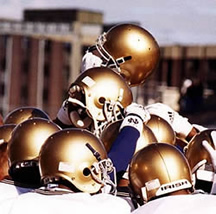 The graduation rate for the Notre Dame football team ranks third among the 56 teams participating in post-season bowl games, according to a report prepared by the Institute for Diversity and Ethics in Sport at theUniversityofCentral Florida.

Notre Dame ranked second at 76 percent in the graduation rate of African-American football players. Northwestern was first at 90 percent.

Nearly half of the teams had an overall graduation rate for football players of 50 percent or less, and two-thirds graduated less than half their African-American football players.

The report used NCAA data from a year ago which based graduation rates on the raw percentage of student-athletes who entered an institution and graduated within six years. Students who left school or transferred, regardless of academic standing, were considered non-graduates.

Among student-athletes, including football players, who completed all four years of athletic eligibility at Notre Dame, 99 percent earned their degrees.

The Central Florida study also used the NCAAs new Academic Progress Report (APR) to evaluate this years bowl-bound football teams, and Notre Dame again fared well with a score of 934. Forty-one percent of the teams fell below the NCAA benchmark of 925.

Starting next year, universities that regularly fall below the 925 score can lose scholarships, face recruiting restrictions and be barred from post-season participation.

_ Sources: The Institute for Diversity and Ethics in Sport and The Associated Press_