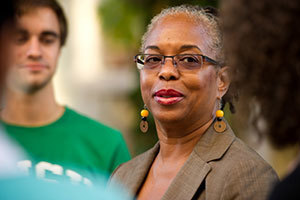 The American Association of Blacks in Higher Education (AABHE) presented the AABHE Exemplary Award for Public Service to Iris Outlaw, director of Multicultural Student Programs and Services at the University of Notre Dame, at the 2015 AABHE National Conference in Charleston, South Carolina, on April 10. The AABHE Exemplary Public Service Award goes to those individuals whose public lives and careers have been superlative with regard to addressing broad policy issues relating to the welfare of black Americans.

The award recognizes those public service leaders who have implemented community, political or business programs designed to stimulate black American participation or influence in those same sectors. Additionally, the award goes to those individuals who have demonstrated a commitment to the association in its past or current configuration.

Brian Coughlin, associate vice president for student development, said, “Iris has been a valuable member of the Division of Student Affairs for 24 years. The Exemplary Award for Public Service from the AABHE is a wonderful recognition of her commitment to the MSPS, the Division of Student Affairs, the University of Notre Dame and the greater South Bend community. It is hard to imagine a more deserving recipient.”

AABHE pursues the educational and professional needs of black Americans in higher education with a focus on leadership, access and vital issues impacting students, faculty, staff and administrators. AABHE also facilitates and provides opportunities for collaborating and networking among individuals, institutions, groups and agencies in higher education in the United States and internationally.