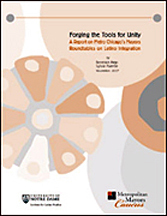 As the Latino population has become the largest racial and ethnic minority in the Chicago area, many municipalities have been challenged to foster diverse and cohesive communities.

To promote immigrant integration, both political parties should work together, especially in the areas of education, housing and social services, according to a new report released Monday (Nov. 19) by the Center for Metropolitan Chicago Initiatives (CMCI) in the University of Notre Dames Institute for Latino Studies, and the Metropolitan Mayors Caucus.

TitledForging the Tools for Unity: A Report on Metro Chicagos Mayors Roundtables on Latino Integration,the report is the result ofroundtablediscussions held earlier this year to promote conversation among Latinos and civic, community, faith and municipal leaders.

We know there can be a lot of negative talk about immigration and how it is affecting our communities,CMCI director Sylvia Puente said.These roundtables are a positive approach that opens up a dialogue between Latinos and leaders of suburban communities in how to create a more cohesive region.

The report states that promoting the integration of the Latino population in the region capitalizes on its economic contributions, including 15 percent of the regions labor force, half of the growth in owner-occupied homes, and $20 billion in household income.

Other key issues identified in the report are:

 Housing Latinos are responsible for half of the total increase in owner-occupied homes in the six-county Chicago area, according to research presented in the report, however they, in particular, are affected by a lack of affordable housing, because they make up a large portion of the lower end of the labor market.As a result, many Latinos cannot afford to live near their jobs and live with others out of economic necessity.

The reports recommended strategies for housing improvement include developing model education programs for tenants and buyers, partnering with developers who have worked with the Latino community, encouraging the development of diverse housing, requiring property inspections before a sale, and reinforcing affordable housing initiatives.

To encourage parental involvement, the report recommends that school districts identify staff members to serve as liaisons between parents and the schools, and provide communication materials in Spanish with bilingual assistance.

 Social Services The report identifies a lack of social services for Latinos in the Chicago suburbs and recommends a range of strategies that build on partnerships and collaboration between established organizations in Chicago and emerging organizations
in the suburbs.Other ideas include building a network of social service providers, disseminating best practices on immigrant integration and providing a comprehensive array of social services in one location.

Founded in 1999, Notre Dames Institute for Latino Studies promotes understanding and appreciation of the social, cultural and religious life of U.S. Latinos by advancing research, expanding knowledge and strengthening community.Its publications are available on the Web at http://latinostudies.nd.edu/pubs/

Additional information on the CMCI is available at http://latinostudies.nd.edu/cmci/