“‘People believe that God used to be able to turn sinners into saints. He could save Saul of Tarsus on the Road to Damascus, but it’s like they don’t seem to think He can do that anymore. Like today’s criminals are just so bad that even God can’t touch them. It’s sad.’* If we still believe that even Saul on the road to Damascus could turn his life around, if we believe that we can be forgiven and redeemed for our transgressions, then we have to believe that all people can turn their lives around and be redeemed. And this belief that a person’s life is never beyond reclamation is powerful, because it calls us to act like we believe no one is a lost cause.”

In spring 2012, the University of Notre Dame’s Center for Social Concerns added a new course, “Rethinking Crime and Justice,” as part of the Inside-Out Prison Exchange Program, a national program based in Philadelphia that creates a dynamic partnership between an institution of higher learning and a correctional facility. 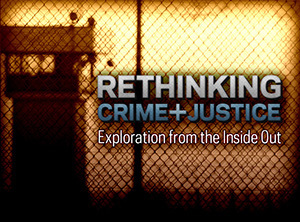 Many Inside-Out practitioners see the program as a creative link between two of the largest and most highly funded institutional and social structures in our country: universities and prisons, structures oriented respectively toward the most privileged and underprivileged people in our society. Through their classes, they attempt to deepen the conversation about those structures and transform student thought and attitude regarding crime and justice issues. Adds Kelly, “Our course aims to bridge the gap between two disparate groups of people. We hope that by studying and working together, students will recognize their common humanity and develop the respect and affection that can lead them to effect positive personal and societal change.”

The Inside-Out program was established in 1997 by Lori Pompa, a professor in the Department of Criminal Justice at Temple University, to bring college students and incarcerated men and women together to explore and learn about issues of crime and justice from behind prison walls. It was founded on the simple hypothesis that incarcerated men and women and college students might mutually benefit from studying together as peers.

The three-credit Notre Dame course, which was held again this past fall, meets once per week for the semester with 15 students from campus — outside students — and the same number of incarcerated people — inside students — attending class together inside the Westville Correctional Facility. As part of the class, all participants read a variety of texts, write several papers and discuss issues in small and large groups. In the final weeks of the semester, inside and outside students work together in small groups on class projects.

“Our goal was to offer Notre Dame students the opportunity to go behind prison walls and reconsider what they have been assuming or believing about crime and our criminal justice system,” said Sharpe. “At the same time those inside the prison — inside students — have a chance to place their life experiences in a larger framework.”

Kendrick, an inside student, said the course has given him the courage to speak out with his friends and family on the outside against senseless violence and crime and to begin to serve as a positive role model. “I got little brothers too. So they look up to me. I’m their role model and I’m just thankful that they haven’t followed in my footsteps. So, I just want to go back out there and just be productive. And this class is teaching me some pointers on how to do that. I feel proud that I can tell my son I took a class with Notre Dame students. When I talk to him about going to college, maybe I can inspire him to go and just do it.”

“Both inside and outside of this institution,” observed David Willcutts, “every person seeking to change is deserving of our help should they need it; every person is worthy of our human kindness as we can give it. Let’s remember we’re all in this together, a community of mankind, and no life is worth leaving behind.”

“Rethinking Crime and Justice: Explorations from the Inside Out” will be offered again in fall 2013.

*Shadd Maruna’s “The Rituals of Redemption”