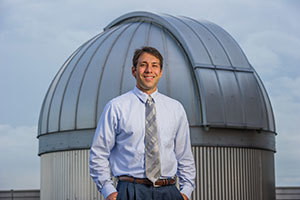 Justin Crepp, the Freimann Assistant Professor of Physics at the University of Notre Dame, has published a study Thursday (Nov. 13) in the journal Science that details how next-generation planet-hunting instruments will benefit from advancements in infrared technology that change how astronomers capture starlight.

At infrared wavelengths, it becomes possible to sharpen the blurry images normally received by large ground-based telescopes. This influences the design of astronomical instruments. By correcting for Earth’s turbulent atmosphere, researchers can dramatically enhance the sensitivity of techniques that reveal the periodic pull of a planet’s gravity on its parent star.

“For 20 years, we’ve been doing the same thing at visible wavelengths,” Crepp said. “If you move out to the infrared, you can access different types of stars, and you can also build different types of instruments. There are a number of interesting physical effects. One of them is that you can use adaptive optics to correct for distortions caused by Earth’s atmosphere. Using crisp images completely modifies the design of your instrument.”

Adaptive optics act like a pair of glasses for telescopes to improve image quality: “The telescope collects the light; the glasses correct the light,” Crepp said. To find the faint signal of an extrasolar planet, astronomical instruments must also be located far from the telescope’s environment to avoid vibrations, and temperature and pressure changes. “We use optical fibers to accomplish this, much like the telecommunications industry delivers Internet service to your home.” However, most fibers suffer from an internal source of noise, which is called “modal noise,” resulting from the light interfering with itself. Using adaptive optics, scientists can instead direct the light into single-mode fibers, tiny wave-guides whose diameters are smaller than the width of a human hair, to provide a pure signal that avoids modal noise altogether.

“No one has done that until now,” Crepp said. “One of the biggest noise sources for finding planets has been eliminated entirely. When you do that, you can find smaller planets like terrestrial worlds located in the habitable zone.”

The technology means that scientists will be able to calculate the mass and density of planets, comparing their properties to Earth to assess whether they are rocky or have a substantive atmosphere. “Whenever we make instruments that work at other wavelengths, we make discoveries,” Crepp said.