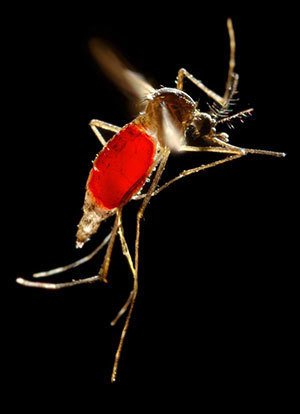 Biting mosquitoes are not only annoying but can be dangerous, even deadly. A new study involving researchers at the University of Notre Dame explores a potential biological mechanism through which disease virus can alter the behavior of mosquitoes. In a previous study, led by Alexandre Peixoto of Fiocruz in Brazil, disease-infected mosquitoes were found to fly around more than uninfected mosquitoes, increasing their ability to spread chronic and deadly diseases.

The new study indicates that drug-treated mosquitoes behave differently than those not treated, flying farther or for a longer duration. While this initially is not good news for humans and animals, the research indicates that with this knowledge researchers can develop better intervention tools to stop disease transmission. Results of the study were published this month in the Journal of Vector-Borne and Zoonotic Diseases.

“What we found was that when the mosquitoes are manipulated with a compound thought to be modified by the dengue virus, it is like they are hyped up on caffeine,” states one of the authors, Giles Duffield, Notre Dame associate professor of biological sciences and member of the Eck Institute for Global Health. “These findings will help our global effort in searching for better ways to control and address mosquito-transmitted illnesses.”

The study also involved University of Notre Dame doctoral candidate Samuel Rund and then-undergraduate student Samuel Lee, Class of 2013, and was in collaboration with researchers at the University of Wisconsin School of Medicine and Public Health, headed by Rob Striker. The team looked at two species of mosquitoes to see if there were changes in their flight activity following pharmacological manipulation that mimics a dengue virus infection. The work at Notre Dame was based on flight activity measured with infrared beam breaks, while the work at Wisconsin was based on microphones to measure the insects’ wing beats. The mosquitoes were exposed to a compound that activates protein kinase G, or PKG, a substance that modifies a particular behavioral pathway in mosquitoes, which then increased their activity. The pathway was known to regulate the behavior of non-disease-carrying insects, but had never been used in experiments with mosquitoes. The results showed increased flight activity in two different species of mosquito, Anopheles gambiae, the night-active and major malaria vector, and Aedes aegypti, a day-active species responsible for transmitting dengue, yellow fever and West Nile virus.

Understanding the molecular mechanism by which flavivirus, such as dengue, yellow fever and West Nile, can manipulate the behavior of the mosquito — thereby increasing the odds that the mosquito will encounter another human host and thus transmit the disease — is important to combating disease transmission.

People infected with the West Nile virus develop symptoms but may not even know they have the illness. In severe cases, the virus may cause dramatic and dangerous symptoms leading to death. Nearly 5,700 people in the United States were diagnosed with West Nile virus in 2012, resulting in 286 deaths.

Globally, dengue fever, a tropical disease that may cause a high fever, severe pain in the joints, muscles and eyes, headaches and bleeding, are increasing. It is thought at least 100 million dengue infections occur annually, resulting in 12,000 deaths, most of them women and children.

There are currently no vaccines to prevent West Nile virus or dengue fever.

The Eck Institute for Global Health is a University-wide enterprise that recognizes health as a fundamental human right and endeavors to promote research, training and service to advance health standards for all people, especially those in low- and middle-income countries, who are disproportionately impacted by preventable diseases.