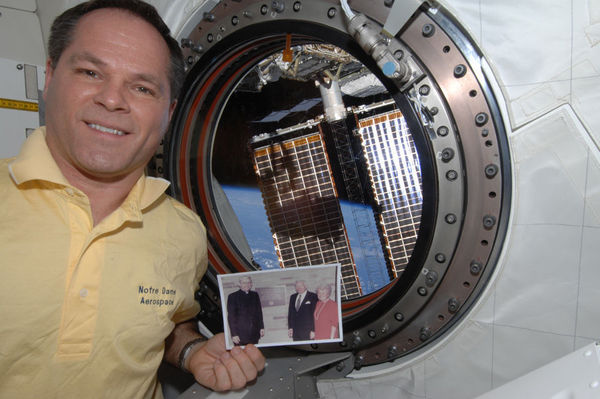 Standing inside the International Space Station, Astronaut Kevin A. Ford holds a photo of University President Emeritus Rev. Edward A. Malloy, C.S.C., and Mr. and Mrs. Thomas Hessert, for whom the Hessert Laboratory for Aerospace Research was named. The photo was taken during the building’s dedication in 1991. Two Notre Dame alumni have served aboard the two most recent flights of the space shuttle. Ford piloted the Space Shuttle Discovery launched on Aug. 29. The crew delivered life support racks and science racks for the further assembly and maintenance of the International Space Station. Michael T. Good flew as a mission specialist on Space Shuttle Atlantis in May. He is on campus today to speak with students and faculty.