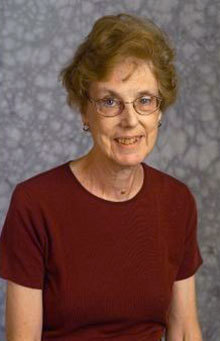 A native of Cleveland, Sister Gude entered the Congregation of the Sisters of the Holy Cross in 1959 and professed her final vows in 1967. A 1963 alumna of Saint Mary’s College, she also earned a licentiate from the University of Montreal in 1968 and a doctoral degree in French literature from the University of Pennsylvania in 1976.

Sister Gude, who was addressed and referred to by all who knew her simply as “ML,” shared a multifaceted career as a teacher, scholar, administrator, pastoral minister and companion with both Notre Dame and Saint Mary’s College. At Notre Dame, she served as an assistant vice president for student affairs from 1998 to 2006 and taught in the Department of Romance Languages and Literatures from 1991 to 1998 and from 2000 to 2006. From 1983 to 1993, she served as assistant rector of Notre Dame’s Breen-Phillips Hall and as rector of Farley Hall. In 2009. she returned to Saint Mary’s College to serve as its vice president for mission until 2011, when the progression of her illness necessitated her resignation. She had also served at Saint Mary’s as an assistant professor of French from 1976 to 1991 and as director of the French program from 1977 to 1987.

Notwithstanding a massive teaching, administrative and pastoral workload, Sister Gude also gained an international reputation as a scholar of 17th-century French fiction and 20th-century French intellectual history. Her publications in these areas include two books, “Le Page Disgraci: The Text as Confession” and “Louis Massignon: The Crucible of Compassion.”

A remarkably modest, even self-deprecating woman, Sister Gude once confessed a degree of pride at her work in Notre Dame’s student affairs office as chair of what was then called the Standing Committee on Gay and Lesbian Student Needs. “I think it’s the work with our gay and lesbian students that I’m most satisfied with,” she said, “and let me tell you, it’s not the easiest work in the world. On the one hand, we’re committed to affirm Church teachings on sexuality, and on the other hand, our commitment obliges us to do all we can to respond to their needs and to make Notre Dame a welcoming place.” Struggling to meet both commitments, Sister Gude often found herself aswirl in a turbulence of passionately held, deeply opposed and vehemently expressed convictions. “Basically, my method was hanging in there. I just refused to go away,” she said.

“ML was a wise and generous colleague, mentor, counselor and friend,” Firth said. “As generations of students can attest, ML had a particular ability to help people ‘launch,’ a compassionate and infinitely encouraging way of walking alongside you as you discovered your future. When you saw yourself through ML’s eyes, it was easy to believe in the possibilities. Her zest for life, her lifelong love of learning, her deep and abiding faith and her capacity for friendship made it a joy to be around her.”

Sister ML remained active in the ministries of prayer, study, writing and spiritual direction until her death.

Memorial contributions may be made to the Sisters of the Holy Cross, Ministry with the Poor, Saint Mary’s, Notre Dame, IN 46556, or online at www.cscsisters.org.