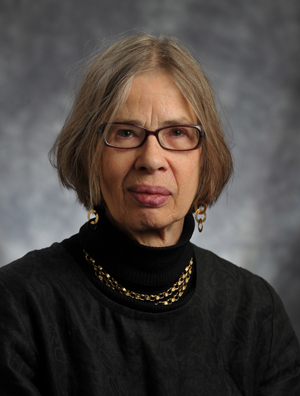 Sabine MacCormack, Rev. Theodore M. Hesburgh, C.S.C., Professor of Arts and Letters at the University of Notre Dame, died Saturday (June 16) after suffering a heart attack while gardening at her home in South Bend. She was 71.

MacCormack, a historian and classicist who taught and wrote about religion and culture in ancient Rome and colonial Latin America, was unusual among her international colleagues for the prominence of her scholarship in those two very different areas. She also was among Notre Dame’s most popular and affectionately regarded teachers, not only among the graduate students whose dissertations she directed, but also among first year students whom she taught in the required University Seminar course. A particular focus of her teaching, she said, was “on the nature of knowledge; on what we think we know, and why, and what we might actually know.”

“Her commitment to the most exacting scholarship spanned centuries, cultures and continents,” said Rev. Robert E. Sullivan, professor of history and associate vice president for academic mission at Notre Dame. “Her devotion to her students, from first year to Ph.D., and her genius for friendship were also catholic.”

One of those students, Clifford Ando, now a professor of classics, history and law at the University of Chicago, said that MacCormack’s painful childhood in a Europe shattered by World War II had left her “intensely committed to the self-redemptive power of human communities and to the role of scholarship in acts of love and understanding. A lifelong commitment to the indigenous populations of Spanish Latin America was, for her, not simply political, nor to one side of historical scholarship. She urged, rather, that responsible historical scholarship should embrace the totality of populations, which were at once Latin and Spanish; Quechua, Creole and Aymaran; European and American.”

MacCormack was one of Notre Dame’s most highly decorated faculty members. Among the conspicuous recognitions of her innovative scholarship were the 2001 Andrew W. Mellon Foundation’s Distinguished Achievement Award and her 2007 election to the American Academy of Arts and Sciences. She was the author of numerous articles and book chapters in several languages and the author of five books, including “Art and Ceremony in late Antiquity;” “Religion in the Andes: Vision and Imagination in Early Colonial Peru;” “The Shadows of Poetry: Vergil in the Mind of Augustine;” and, most recently, “On the Wings of Time: Rome, the Incas, Spain and Peru.”

Steve Reifenberg, executive director of Notre Dame’s Kellogg Institute for International Studies, of which she was a faculty fellow, said that MacCormack had been instrumental in developing both Notre Dame’s Ph.D. track in Latin American history and the University’s Latin American Indigenous Language Learning Program, which she endowed with funds from her Mellon Foundation award. “Most recently,” he said, “she organized the 2011 Symposium on Teaching and Learning Indigenous Languages of Latin America, which brought together experts, including many indigenous participants, from across the Americas. At the time of her death she was editing a collection of essays by the symposium’s participants.”

“Sabine was one of the most distinguished humanists in Notre Dame’s history, and one of the leading humanists in the contemporary scholarly world,” said John McGreevy, I.A. O’Shaughnessy Dean of the College of Arts and Letters. “Her scholarly range, from antiquity to the colonial Andes was matched by her extraordinary scholarly passion, from the impeccable Latin she used to study Augustine to the Quechua she mastered to better understand the lives of Andean indigenous people during the period of the Spanish conquest.”

Most recently, as if to illustrate that passion and range, MacCormack had been at work both on a textual exegesis of Saint Augustine’s commentaries on Genesis and on a study of the life and ideas of the 16th century Jesuit missionary, historian and theologian José de Acosta S.J.

A funeral Mass will be celebrated Friday (June 22) at 2 p.m. in Saint Matthew Cathedral Catholic Church in South Bend. Contributions may be made to the Bishop Crowley Education Fund in care of the Cathedral of St. Matthew. A memorial Mass for Sabine MacCormack in Notre Dame’s Basilica of the Sacred Heart is being planned for early next fall at a date and time to be announced.