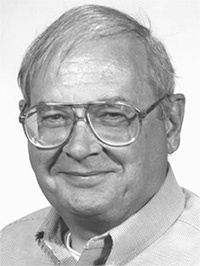 Richard W. Conklin, former associate vice president for University Relations at Notre Dame, died Tuesday (May 28) at his home in Mendota Heights, Minn. He was 77.

Conklin, a Minneapolis native, returned to his native region in 2001, having retired from 35-year career directing media relations at Notre Dame. During his tenure as the University’s chief publicist, his responsibilities ranged far beyond routine news writing and publicity advice to include taping an exhaustive series of historical interviews with Notre Dame’s president emeritus Rev. Theodore M Hesburgh, C.S.C.; editing two of Father Hesburgh’s autobiographical bestsellers, “God, Country, Notre Dame” and “Travels with Ted & Ned”; publicizing the dedications of new Notre Dame educational facilities in London and Dublin; oversight of the production of the movie “Rudy,” the first feature to be filmed on the Notre Dame campus since 1940; and supervision of the University’s entrance into the digital information age with the production of a CD-ROM for the University’s admissions office.

A 1958 graduate of the College of Saint Thomas, Conklin earned a master’s degree in American Studies from Notre Dame the following year. He worked for a time as a reporter for the Saint Louis Post-Dispatch and the Minneapolis Star and in 1962 returned to the College of Saint Thomas to direct its news bureau and to teach journalism courses. By the time he moved to Notre Dame, five years later, he was equally accustomed to the din of the newsroom and the decorum of the lecture hall.

He never quite lost that balance, and at work, neither the torque of the news cycle nor the tension of an institutional crisis could prevent him from taking a few minutes, if he felt like it, to give his colleagues an admonishing lecture on the reprehensibility of the split infinitive or the appropriate use of a copulative verb. At home, where the Conklins hosted an annual croquet match that might have been scripted by Lewis Carroll, his greatest delight was to serve as referee, intervening with hopelessly arcane citations from the Encyclopedia Britannica’s C volume.

Conklin’s love of Notre Dame was unreserved. There were other great universities, to be sure, he remarked after the dinner celebrating his retirement, “but they are one-dimensional, rooted in the belief that man’s reason is the measure of all things. Notre Dame, in contrast, has more than one dimension. It is in fact a place nurtured by myth. Its reality cannot be encompassed by the mind alone; much of its meaning is intuited. Notre Dame is sustained by taking seriously imponderables. It believes in grace, so it knows sin. It believes in duty, so it knows honor. It believes in commitment, so it knows love. At the core of its culture is the belief in the transcendent, that the ultimate meaning of life is found just beyond where reason can take us.”

Even after that evening, he never really left the place. With nearly forensic attentiveness (and always on the lookout for split infinitives), he continued to read every public pronouncement of the University. He also frequently revisited campus as an all-purpose consultant or as a member of Notre Dame Magazine’s editorial advisory board, but always as a friend, and always to hear and tell a few stories. “When Notre Dame people gather, they do not talk about their alma mater’s transcendency any more than swimmers converse about water’s buoyancy,” he used to say. “Notre Dame people tell stories.”

Few Notre Dame people told stories as well as Dick Conklin did. Few people figured so well in them.