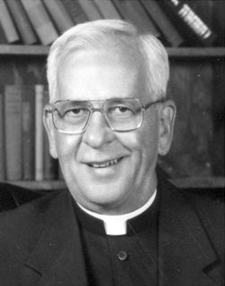 A native of Braddock, Pa., Father Walter attended St. Joseph’s grade school and St. Thomas High School there before enrolling in Duquesne University in Pittsburgh, from which he was graduated in 1951.

Following his graduation, he did graduate studies in chemistry at the University of Pittsburgh, working for two years there in the laboratory of Dr. Jonas Salk, the developer of the eponymous polio vaccine, and receiving a doctoral degree in 1955. Within ten days of receiving his degree, Father Walter came to Notre Dame to begin studies for the priesthood.

Father Walter taught chemistry during summer sessions at Notre Dame from 1958 to 1961, when he joined the chemistry faculty. A popular and award-winning teacher, he taught courses in chemistry, analytical chemistry, inorganic chemistry, inorganic preparations, graduate inorganic chemistry and coordination chemistry. He also ran the graduate chemistry program, and delivered numerous papers at meetings nationwide, even after a 1971 appointment as chair of Notre Dame’s Department of Preprofessional Studies greatly increased his workload. From that year to his retirement in 2005, he proudly watched nearly 5,500 graduates of the department embark on careers as physicians, dentists and other health professionals.

Visitation for Father Walter will be in the Chapel of Moreau Seminary on Sunday (April 22) from 3:30 to 9 p.m. with a wake service at 7:30 p.m. A funeral Mass will be celebrated at the Basilica of the Sacred Heart Monday (April 23) at 3:30 p.m.

Memorial contributions in support of the mission and ministries of the Congregation of Holy Cross can be made in Father Walter’s memory to: United States Province of Priests and Brothers, Office of Development, P.O. Box 765, Notre Dame, IN 46556-0765.