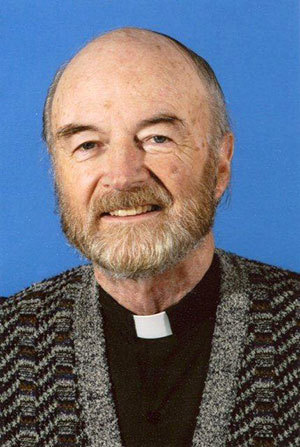 Rev. John S. Dunne, C.S.C., John A. O’Brien Professor of Theology at the University of Notre Dame, died early Monday (Nov. 11) at Holy Cross House after a long struggle with complications of a head injury sustained in July. He was 83.

“On behalf of the University, I extend my deepest condolences to the family and friends of Father John S. Dunne, a beloved teacher, scholar, priest and friend,” said Notre Dame President Rev. John I. Jenkins, C.S.C. “John brought humility, honesty and intellectual prowess to a quest of faith seeking understanding, and in sharing the journey, he made lasting contributions to the lives of countless students, colleagues, fellow religious and many readers of his books. Like many others, I benefited greatly from classes and conversations with John, and mourn his passing. He will be missed by all.”

A native of Waco, Texas, Father Dunne attended St. Edward’s Academy in Austin before entering Holy Cross Minor Seminary at Notre Dame, where he made his first vows to the Congregation of Holy Cross in 1947. He studied philosophy and graduated from Notre Dame in 1951. He was ordained to the priesthood in 1954, in Rome, where he also earned advanced degrees from the Gregorian University.

Father Dunne returned to Notre Dame in 1957 to become one of its most popular, even beloved, teachers. In addition to teaching more Notre Dame students than any other person in the University’s history, he wrote some 20 influential works on theology and the spiritual life, including “The City of the Gods,” “A Search for God in Time and Memory” and “Way of All the Earth.” His most recent book, “Eternal Consciousness,” received a first-place award from the Catholic Press Association.

Gus Zuehlke, a friend and former student, spent some time at Father Dunne’s hospital bedside and reported on his visit in a post to Notre Dame Magazine: “As I was silently praying in John’s room, a nurse walked in and said to me, ‘I’m on my break. Can I stay in here for a while?’ ‘Sure,’ I replied. ‘You see,’ the nurse said, ‘I feel God here.’ I said to him, ‘I understand.’” Generations of Notre Dame students and alumni would understand as well.

Visitation will be from 3:30 to 7 p.m. Thursday (Nov. 14) in the Lady Chapel of the Basilica of the Sacred Heart, where a wake service will be held at 7:30 p.m. A funeral Mass will be celebrated at 3:30 p.m. Friday (Nov. 15) in the Basilica and immediately followed by burial in the Holy Cross community cemetery.

Memorial contributions in support of the mission and ministries of the Congregation of Holy Cross can be made to United States Province of Priests and Brothers, Office of Development, P.O. Box 765, Notre Dame, IN 46556-0765, or online at donate.holycrossusa.org.