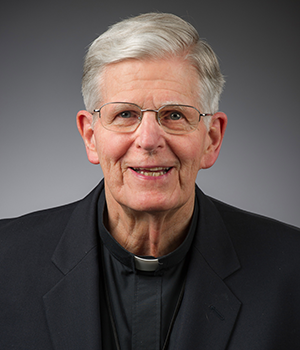 "Father Don McNeill engaged, encouraged, and empowered laypeople, especially students, to make the world a better, more just place for all," said Rev. John I. Jenkins, C.S.C., Notre Dame's president. "Under his direction, countless Notre Dame alumni have become faithful and generous contributors to the common good. We are sad at his passing and give thanks for the legacy he left us."

A native of Chicago, Father McNeill was born on born April 14, 1936, the second of the three sons of Donald and Katherine McNeill. His father and namesake was a pioneer radio personality, whose “Breakfast Club” variety show was the longest-running program in network radio history.

A 1958 Notre Dame alumnus and a member of the Notre Dame faculty since 1966, Father McNeill was ordained a priest in the Congregation of Holy Cross in 1965, studied theology at the Pontifical Gregorian University in Rome and earned a doctoral degree from Princeton Theological Seminary in 1971.

On the rare occasions when Father McNeill could be persuaded to comment on a ministry and career that profoundly affected the institutional shape and mission of the University, he would speak less of his own role than those of three other Notre Dame priests — Rev. Theodore M. Hesburgh, C.S.C., the 15th president; Monsignor John Joseph Egan, the activist Chicago priest who assisted Father Hesburgh from 1970 to 1983; and Father Henri Nouwen, the spiritual writer and visiting lecturer in psychology at Notre Dame from 1966 to 1968.

His early years of teaching were challenging, he once confessed in an interview. When he returned from Rome to the Notre Dame campus, he had doubts that he “could be a teacher in the classical sense” and felt out of place. “I was feeling unqualified as far as my prayer life … and I didn’t want to be a hypocrite,” he said.

Father McNeill credited Father Nouwen and Father Hesburgh not only for strengthening his vocation, but also for encouraging and deepening his doctoral study of pastoral theology, which convinced him of the crucial importance of fusing experiential and interdisciplinary learning with religious faith. It was a conviction to which Father McNeill, in collaboration with Monsignor Egan, gave academic and institutional expression in numerous theology courses, community-based research projects and service learning immersions, which have since come to exemplify Notre Dame’s commitment to the social teaching of the Catholic Church. It also gave rise to the 1981 book “Compassion: A Reflection on the Christian Life,” which he co-authored with Father Nouwen and Douglas A. Morrison.

Father McNeill also was one of a small number of priests in residence in Notre Dame’s first women’s residence halls. He continually advocated for greater involvement of women and laity in the Church and acknowledged the women he considered spiritual mentors in the later days of his life.

Father McNeill’s devotion to his students and to Catholic social teaching made him one of Notre Dame’s most popular and influential teachers. A faculty award citation in 1980 described how “with his large frame and larger vision, he moves in and out of the lives of students and faculty, probing, seeking and challenging - reminding us all that education can never be contained totally in the lecture hall, the library or the laboratory. He dreams about this place in the great tradition of his predecessors in Holy Cross.”

In 1983, one of the fondest of Father McNeill’s dreams was realized in the establishment of Notre Dame’s Center for Social Concerns, of which Father McNeill served as executive director until 2002. Committed to engaged learning, research and service informed by the Catholic social tradition, the center is a crucial and distinctive component of a Notre Dame education and involves more than 2,500 students annually in its programs.

“Father Don had a vision of Notre Dame students not just learning, but enacting the Catholic social tradition through compassionate care for those on the margins,” said Rev. Paul Kollman, C.S.C., Leo and Arlene Hawk Executive Director of the Center for Social Concerns. “By joining theological reflection with research and learning that is grounded in community partnerships, he established a foundation for the Center for Social Concerns that has guided us ever after.”

A wake will begin at 7:30 p.m. Tuesday (Aug 29) at Moreau Seminary Chapel. A funeral Mass will be celebrated at 3:30 p.m. on Wednesday (Aug. 30) in the Basilica of the Sacred Heart on campus. Burial will follow in the Holy Cross Community Cemetery. A post-burial reception will be from 5:00-7:00 p.m. in the Remick Commons of Carole Sandner Hall (IEI/ACE). Contributions in Father McNeill’s honor can be made to the Center for Social Concerns.

Live stream of Rev. Don McNeill, C.S.C., funeral from the Basilica of the Sacred Heart, Notre Dame, will begin at 3:30 p.m., this Wednesday, August 30.