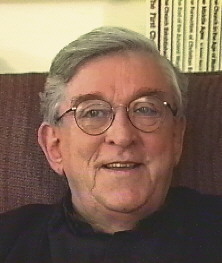 Born July 9, 1930, in St. Paul, Minnesota, Father O’Connell was the only child of Richard and Anna Mae (Kelly) O’Connell. He grew up in small towns in southern Minnesota and northern Iowa during the Depression. “I don’t think I was particularly peculiar,” he once wrote, “though as a new boy in school — five different ones over the course of my eight grades — I had to prove myself by awkward fights in the playground, and I always ended up with plenty of friends with whom I could share the usual diversions of masculine childhood, but I also discovered the wonders of the local public library.”

He discovered a vocation to the Catholic priesthood as well, studying at the St. Paul Seminary of the University of St. Thomas and earning a master’s degree in history before being ordained for the Archdiocese of St. Paul and Minneapolis in 1956. He earned a doctoral degree in history from Notre Dame in 1959 and returned to St. Thomas to teach history there until 1972, when he joined the history faculty at Notre Dame.

At Notre Dame, Father O’Connell soon became one of the University’s most popular, challenging and affectionately regarded graduate and undergraduate teachers, chairing Notre Dame’s history department from 1974 to 1980 and directing the University’s undergraduate program in London from 1993 to 1995. All his well-attended lectures were delivered in a booming basso profundo, and he was demonstratively intolerant of faltering attention spans. “His rather intimidating physical presence,” a former O’Connell student remembers, “guaranteed that undergraduate students maintained high standards of decorum and commitment in his classroom.”

He certainly held himself to such high standards as well. “However often and egregiously I have failed to live up to it,” he once wrote, “my ideal has always been to see the past, and to reconstruct it, as an integral whole, with all the interrelationships and complexities that that involves.”

“Father Marvin O’Connell stands in the very front rank of the distinguished historians who have taught and written at Notre Dame,” said Rev. Wilson D. Miscamble, C.S.C., professor of history. “He utilized his striking talents as a historian as an integral part of his fundamental vocation as a priest. He well understood the crucial role of the historian in the life of the Christian people, and he made the history of the Church his special subject. Father O’Connell’s magisterial account of the life and times of Edward Sorin should be required reading for all those who want to understand the history of this university that he loved and served so well."

In addition to his biography of Father Sorin, Father O’Connell published numerous articles and essays in scholarly and popular journals and several books, including “Pilgrims to the Northland: The Archdiocese of St. Paul, 1840-1962,” “John Ireland and the American Catholic Church,” “Blaise Pascal: Reasons of the Heart,” “Thomas Stapleton and the Counter Reformation,” “McElroy,” “The Oxford Conspirators: A History of the Oxford Movement, 1833-1845,” “The Counter Reformation, 1559-1610” and “Critics on Trial: An Introduction to the Catholic Modernist Crisis.”

The subjects Father O’Connell taught and wrote about varied widely, including the characters and controversies of the 16th and 17th centuries in early modern Europe; the ecclesial, theological and cultural arguments of 19th-century Oxford and among Catholics and Anglicans in England; the Catholic Modernists in Europe and Archbishop John Ireland’s interactions with the Americanist movement in this country. He was an inveterate storyteller, and his books, no less than his lectures, were notable for what one reviewer called “a painterly eye and an elegant craftsmanship.” Shortly after his retirement from active teaching, Father O’Connell himself, in an address to the American Catholic Historical Association, said that “history, whatever its scientific trappings, remains an art, and we are artists. Existentially the past is gone beyond recall; whatever reality it possesses depends upon us who think about and write about it.”

Nevertheless, about his own artistic accomplishments he was humble. He particularly liked to tell a story about proudly presenting his mother with his first published book, on the 16th-century English Catholic theologian Thomas Stapleton. His mother told him that she planned to read it during Lent. “After finishing the first chapter,” Father O’Connell said, “she let me know that she had changed her mind. She’d decided not to read my book and to give up chocolate instead.”

A wake service will be held from 4 p.m. to 6 p.m. Tuesday (Aug. 23) at Kaniewski Funeral Home, 3545 N. Bendix Drive, with a Rosary at 5 p.m. A funeral Mass will be celebrated at 9:30 a.m. Wednesday (Aug. 24) in the Basilica of the Sacred Heart. Burial will follow immediately in the Holy Cross Community Cemetery at Notre Dame. Memorial contributions may be made to the Rev. Marvin R. O’Connell Award Fund in Notre Dame’s Department of History.