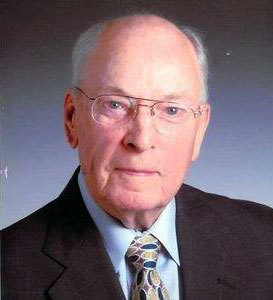 James W. Frick, former vice president for public relations, alumni affairs and development at the University of Notre Dame, died Wednesday (April 9) at his home in Naples, Fla. He was 89.

Born Aug. 5, 1924, in New Bern, N.C., Frick, the third of five children in a family beset by the Great Depression, was raised and educated through high school in a Catholic orphanage. He served in the U.S. Navy during World War II before enrolling in Notre Dame as a 23-year-old freshman, working part time in the University’s development office — then called the Notre Dame Foundation — before his graduation in 1951.

Immediately following graduation, Frick took a full-time post in the foundation, becoming the first administrator in Notre Dame’s history to engage exclusively in development work. He was appointed Notre Dame’s director of development in 1961 and four years later elected vice president for public relations and development, the first lay officer in the University’s history.

“Jim Frick took over a fledgling development organization and turned it into one of the most successful fundraising operations in the nation,” said Notre Dame’s president emeritus Rev. Theodore M. Hesburgh, C.S.C. “Few individuals have left the University more in their debt than he, and few have had a more decisive and widespread effect on the history and development of Notre Dame.”

During Frick’s 18 years as vice president, Notre Dame embarked on four major fundraising campaigns raising more than $300 million from alumni, parents, friends, corporations and foundations. His tenure was marked by an unprecedented institutional growth as the market value of the University’s endowment rose from $9 million to more than $200 million and more than 40 buildings were constructed on campus.

“Jim Frick was truly the pioneer and mastermind behind Notre Dame’s fundraising success from the very beginning,” according to William P. Sexton, professor emeritus of management, who succeeded Frick as vice president in 1983. “No one was more creative, more passionate, more energetic, more accepting of sacrifice nor more effective than Jim. He deserves credit for much of the success the University enjoys today.”

“I fell into a field which suited my talents at a place which suited my needs for a cause,” Frick once told a colleague. “I think my determination, my compulsion to work and succeed, my abundance of energy all combined to enable me to apply myself without reservation to an institution I dearly love. Sometimes I get into difficulty because I don’t understand how someone who has a close relationship with Notre Dame can refuse to devote his resources and energies to the place. I have a tendency to become too aggressive in certain situations. I have to be careful not to overdo it at times.”

Frick’s twin enthusiasms — for his job and for his alma mater — could be costly. A nearly compulsive record keeper, he once noticed and remarked that in 1976, a particularly eventful year of his tenure, he spent 36 weeks traveling 70,000 miles and ate 263 dinners away from home. Such exertions contributed to several heart attacks, two of them nearly fatal, and were noted officially in 1983 when the University conferred on Frick an honorary degree citing “a man who has literally worked his heart out for Notre Dame.”

In addition to his development work, Frick earned a doctoral degree in educational administration from Notre Dame in 1972. Following his retirement as vice president, he served on the University’s board of trustees from 1983 to 1985.

A nationally prominent consultant in educational philanthropy, Frick had also remained active in a variety of community endeavors, including United Way, the National Urban Coalition, the United Negro College Fund and the American Heart Association. He was the first president of the Community Foundation of St. Joseph County.

Frick was preceded in death by his son Thomas. He is survived by his loving wife of 30 years, Karen A. Frick; his children, Michael (Stephanie), Terry (Cindy), Theresa Frick and Katy Meyer; two stepsons, Sean (Karen) and Daniel Pieri; two brothers, Odo and Fred Frick; 13 grandchildren; and one great-granddaughter.

A funeral Mass will be celebrated at 9:30 a.m. Wednesday (April 16) in the Basilica of the Sacred Heart on campus. Visitation will be from 2-4:30 p.m. and 6-9 p.m. Tuesday (April 15) at Kaniewski Funeral Home, 3545 N. Bendix Drive, South Bend. Memorial contributions may be made to the Notre Dame Magazine, the Notre Dame Annual Fund or the Community Foundation of St. Joseph County.