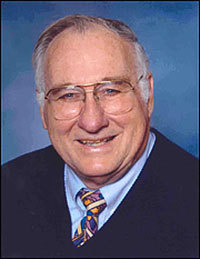 James A. Roemer, former director of community relations at the University of Notre Dame, died Sunday (Aug. 10) in California. He was 83.

A native of South Bend, Roemer spent most of his childhood on or near the Notre Dame campus, where his father, William P. Roemer, taught philosophy. All of his five brothers graduated from the University and his sister, a graduate of Saint Mary’s College, earned a master’s degree from Notre Dame. Roemer’s high school years were spent at Notre Dame’s Holy Cross Seminary.

After serving three years as University attorney, Roemer was appointed Notre Dame’s dean of students, a position he held for nine years. His disciplinary responsibilities as dean would occasionally bring Roemer into contentious relations with the undergraduate men and women in his charge, and he was occasionally satirized in student cartoons as a steel-helmeted military autocrat, but such caricatures could never long withstand the real man’s ingenuous good will and cheerfully avuncular demeanor.

“Jim’s contributions to Notre Dame were many, varied and extraordinarily valuable over many, many years,” said Rev. John I. Jenkins, C.S.C., the University’s president. “My prayers and deepest condolences go out to his wife, Mary Ann, his family and his many friends in our community.”

In 1984, Roemer became Notre Dame’s first director of community relations, not only representing Notre Dame to the communities of Michiana, but also initiating several influential programs including the SOLE Minority Law School program, the Legal Experience and Academic Development program for law students, the National Youth Sports Program, Christmas in April (now called ReBuilding Together) and the Coalition Against Drugs in St. Joseph County. He also helped found the Dismas House of Michiana and later served on that organization’s national board.

A funeral Mass will be celebrated at 2 p.m. Thursday (Aug. 22) in the Basilica of the Sacred Heart at Notre Dame and a reception will follow at the Morris Inn on campus. Donations in Roemer’s honor may be made to Notre Dame’s Center for Social Concerns or the Rebuilding Together program in South Bend.