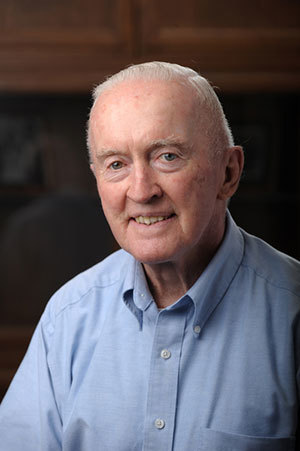 Charles E. Rice, professor emeritus of law at the University of Notre Dame Law School, died Wednesday (Feb. 25). He was 83.

A member of the Notre Dame law faculty since 1969, Rice specialized in constitutional law and jurisprudence.

A 1953 graduate of the College of the Holy Cross, Rice earned his juris doctor degree from Boston College in 1956 and his master of laws and doctor of juridical science degrees from New York University in 1959 and 1962, respectively. After private practice in New York City, he taught at C.W. Post College, New York University and Fordham University before joining the Notre Dame law faculty.

“Professor Charles Rice epitomized all that is best about Notre Dame,” said his friend and colleague Rev. Wilson Miscamble, C.S.C., professor of history. “His contribution as a teacher and scholar in the Law School influenced at least two generations of students to become lawyers who saw their work as a vocation and not just a career. His profound commitment to the pro-life cause and to the truths of natural law, which were so evident in his writings, and in his speaking and television appearances, gave him an influence far beyond the Notre Dame campus.”

A popular and colorful teacher and a staunch pro-life advocate, on campus and nationwide, Rice co-authored numerous legal briefs involving right-to-life and right-to-die issues. He also was the author of 13 books, including “Freedom of Association,” “The Supreme Court and Public Prayer,” “The Vanishing Right to Live,” “Authority and Rebellion,” “No Exception: A Pro-Life Imperative” and, most recently, “Contraception and Persecution.”

Throughout his years at Notre Dame, Rice was a prominent coach, referee and faculty adviser of the University’s annual Bengal Bouts men’s boxing tournament, a fundraising event for the Holy Cross Missions in Bangladesh.

Visitation will be held 4-8 p.m. Saturday (Feb. 28) and 2-7 p.m. Sunday (March 1) at Hahn Funeral Home in Mishawaka, Indiana. A funeral Mass will be celebrated at 11 a.m. Monday (March 2) at St. Joseph Church in Mishawaka. Memorial contributions may be made care of Father Terrence Fisher to St. Joseph Parish, Mishawaka, or to the Charles E. Rice Fellowship at Notre Dame Law School, Notre Dame, IN 46556.