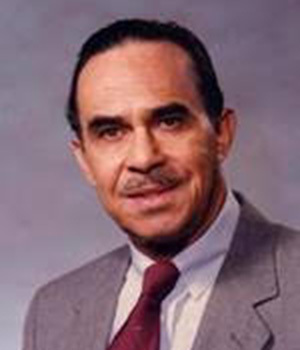 University of Notre Dame President Rev. John I. Jenkins, C.S.C., extended his condolences to the family and friends of Adam S. Arnold Jr., associate professor emeritus of finance and the University’s first African-American faculty member. Arnold died April 14. He was 94.

“After serving in the Army in World War II, Dr. Arnold came to Notre Dame in 1957 and served on our finance faculty for the next 30 years,” Father Jenkins said. “He was a pioneer who served Our Lady’s University with distinction. Our prayers and best wishes are with his family.”

Born April 28, 1922, in Danville, Kentucky, Arnold spent much of his youth in Lexington, Kentucky. A member of the Beta Sigma National Honor Society and Kappa Alpha Psi fraternity, he attended West Virginia State College, where he met his wife, Helen. Upon graduating, he was drafted into the U.S. Army and served during World War II in Normandy, Northern France, Germany, Central Europe and the South Pacific.

At the end of his military service, Arnold left the Army at the rank of staff sergeant and enrolled in the University of Wisconsin, where he earned a master’s of business administration degree and a doctorate in finance.

He served as a professor and chair of the Department of Business at Fisk University and Tennessee State University in Nashville. He also served on the business faculties at Prairie View A&M University and the University of Wisconsin, and was an adjunct professor at Hampton Institute and the College of William and Mary.

Most of his professional life was spent at Notre Dame, where he became the first African-American appointed to the faculty in the Department of Finance in 1957 and the first to receive tenure. He served as the faculty advisor to the League of Black Business Students, and in 2003 received the William P. Sexton Award from the Notre Dame Alumni Association, given to non-alumni faculty or staff whose lives exemplify the spirit of the University.

A memorial funeral service will be held at Immaculate Conception Catholic Church, 2150 Cunningham Dr., Hampton, Virginia, at 11 a.m. May 5.