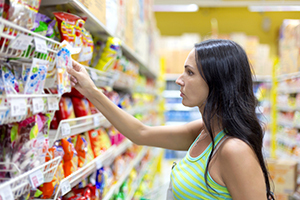 Admit it: you’ve done it. We all have. You go to the grocery store with a short list of essentials you need to pick up, only to find impulse purchases like sea salt caramel gelato and Cool Ranch Doritos when you unpack your grocery bags at home.

It’s a phenomenon well-known to consumers and heavily researched by economists and social scientists. However, University of Notre Dame marketing researcher Timothy Gilbride and colleagues shed new light on this behavior in a new Journal of Marketing paper.

Gilbride, Jeffrey Inman of the University of Pittsburgh and Karen Melville Stilley of Market Rise Consulting found that shoppers are more likely to make unplanned versus planned purchase later in their shopping trip.

“So, there is a good reason why the celebrity gossip magazines and candy are located closer to the check-out aisles," Gilbride said.

He notes that over the course of a trip to the supermarket, shoppers are more likely to make unplanned versus planned purchases. For some shoppers, early in the shopping trip, making an unplanned selection increases the probability that the next selection will be planned.

“This is consistent with ‘self-regulation’ theory: Shoppers want to keep to their budget and or the items on their lists, so when they make an unplanned selection, they get back on course by being more deliberate about choosing a planned item for their next selection,” Gilbride said. “However, it’s hard to keep to those shopping goals with so much temptation around you. This is referred to as ‘resource depletion.’ It takes mental effort to keep to our goals, and over time, we get tired and are less conscientious, or just give up.

However, Gilbride explains that another theory called “cueing theory” suggests that when a shopper makes an unplanned selection it acts as a cue, or prompts the shopper to remember other products that she might have forgotten to put on her list.

“This effect is believed to begin right from the beginning of the shopping trip, and the longer you are shopping, the more likely you are to remember items,” he said. “In this instance, an unplanned purchase always increases the probability of making another subsequent unplanned purchase. We found this theory described shoppers with moderate or medium-sized shopping budgets, who are more likely shopping for a week’s worth of groceries.”

Both the self-regulation and the cueing theories suggest that shoppers are more likely to make unplanned versus planned purchase later in their shopping trip, and this is what the researchers found.

“We did not explicitly test to see if unplanned purchases are considered to be ‘good’ or ‘bad’ by consumers, but consumers should be cognizant of this tendency to make more unplanned instead of planned purchases as the shopping trip progresses,” Gilbride said. “Keeping track of how much you have spent on planned versus unplanned items compared to your trip budget will likely boost your willpower and help you control your overall spending. I anticipate that we will see a lot more mobile apps that will allow us to enter in our shopping lists, use our phone to scan items as we select them, and tell us how much we have spent on planned and unplanned items.”

The study’s findings also have implications for retailers.

“First, our results suggest that in-store sampling or other in-store promotions should be located more deeply in the trip when consumers are more receptive to unplanned purchases,” Gilbride said. “Second, stores have the opportunity to use more data to customize their offerings to consumers.

“For instance, our results show that a shopper’s past data can be used to identify items more likely to be bought on a planned versus unplanned basis; these would be the beginnings of an individualized shopping list proposed by the retailer. To the extent that retailers provide mobile shopping apps and harness that data on a real-time basis, tailored offerings can be made during the shopping trip.”

He also believes that the study’s results suggest that shoppers would be especially receptive to offers for a “fun” unplanned item after a shopper purchases a planned, “less fun” item.

“So a shopping app might offer a coupon for a half gallon of ice cream, if it’s not on the shopping list, after the shopper has selected a planned carton of eggs.”

As in many new discoveries about consumer behavior, Gilbride believes that retailers will have to ask themselves if they want to “play the long game” and use this information and emerging technology to enhance consumers’ overall shopping experience, such as helping them to keep to their budgets while still enjoying finding unplanned items, or simply try to increase the total number of purchases on any given trip.

Gilbride’s research focuses on the development and application of Bayesian statistical methods in novel or complex data sets found in marketing. In this paper, he, Inman and Stilley used fairly sophisticated statistical methods to test behavioral theories in an actual consumer setting.