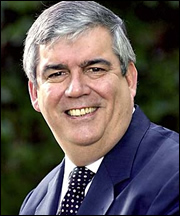 John Kamm, an American businessman whose international business savvy and trusted relationships with Chinese officials won the release of hundreds of political prisoners in China, will deliver the 2005 OGrady Asia Lecture at the University of Notre Dame.

TitledCivil Rights, Human Rights: The Struggle for Justice in the United States and China,the presentation will take place March 15 (Tuesday) at 5 p.m. in the Jordan Auditorium of the Mendoza College of Business.

Kamm will present a second lecture, titledDui Hua: The Strategy and Technique of Human Rights Work in China,on March 16 (Wednesday) at 2 p.m. in the auditorium of the Hesburgh Center for International Studies.Both lectures are free and open to the public.

As a businessman in China in the 1970s, Kamm gained an understanding of cultural influences that affected the ways the Chinese viewed trade partners, and leveraged his business relationships to win the freedom of Chinese prisoners of conscience.

Kamm is founder and executive director of the Dui Hua Foundation, a non-profit organization dedicated to improving human rights by means of a well-informed dialogue conducted between the United States and China.He also currently serves as director of the National Committee on U.S. – China Relations.

He is the recipient of several awards, including the Department of Commerces Best Global Practices Award in 1997 and the Eleanor Roosevelt Award for Human Rights from President Bush in 2001.In 2004 he received a fellowship from the John and Catherine T. MacArthur Foundation for his development of original ways to make a difference in todays world.

The annual OGrady Asia Lecture Series is made possible through the benefaction of Robert E. and Beverly OGrady and is designed to foster a greater understanding of Asias importance to global culture, commerce and politics.Robert OGrady is a 1963 Notre Dame graduate.