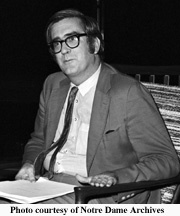 He lived alone in a nondescript apartment complex within walking distance of the Notre Dame campus.He also ate most of his meals alone, and gravely, in the Decio Hall cafeteria, after which he would sit companionless at one of the outdoor tables, smoking and thinking. He was, as one bemused colleague recollects,“a deep cove.”

But when he died five years ago at the age of 64, Phillip J. Quinn, John A. O’Brien Professor of Philosophy, also was eulogized as"a jewelÖrare and valuable, a treasure whose loss we mourn."

The eulogist was one of Quinn’s colleagues, Paul J. Weithman, professor of philosophy at Notre Dame, who has edited"Liberal Faith,“an anthology of philosophical essays in Quinn’s honor published this month by the University of Notre Dame Press.
An internationally respected specialist in the philosophy of religion and the philosophy of science, Quinn was the author of innumerable articles and reviews in various philosophical journals and anthologies.He also was the author of such authoritative works as”Divine Commands and Moral Requirements"and"The Philosophical Challenges of Religious Diversity"and the co-editor of"A Companion to Philosophy of Religion."

According to David Solomon, W.P. and H.B. White Director of Notre Dame’s Center for Ethics and Culture, Quinn’s scholarship"was of the highest quality and was influential in a number of areas of philosophy.He was especially insightful in all of those areas where moral philosophy encountered religion and they both encountered politics."

Quinn doubtless approves of the"Liberal Faith"essays whose authors, as Weithman says,“honor Phil by putting their talents to work advancing discussion of a representative sample of questions he cared about.”

If anything unites the multiplicity of world views and chosen topics in"Liberal Faith"it is a recognition of what Weithman calls"the inevitability of religious and cultural pluralism in the modern world."

Quinn was likewise opposed to all forms of parochialism.“Phil’s religion was also that of a liberal,”as Weithman says of the Catholic philosopher, adding that"the rituals of his childhood faith had a vestigal hold on him that became apparent to his friends at the end of his life."

One of those friends, Solomon, has described Quinn as"exquisitely sensitive to the fact that for Christians, God demands perfect justice as well as perfect mercy.He was always at pains to remind his readers that while God issued categorical commandments and expected obedience, he also exhibited mercy to those whose obedience was less than perfect."

Solomon’s wife, Mary Lou, and Weithman glimpsed a bit of that mercy at Quinn’s hospital bedside a few hours before he died.
“When we were ready to go, we each gave him a hug,”Weithman remembered.“As we left Phil’s room, he gave us a grin.It was not a cloying little smile.It was the kind of big, open-mouthed, toothy grin that lights up a face and makes you feel like amillion dollars.”

That face, the face"of somebody who couldn’t be happier,“is Weithman’s last memory of the man memorialized in”Liberal Faith."A priest anointed Quinn a few hours later, and a few days later his funeral Mass was celebrated in Notre Dame’s Basilica of the Sacred Heart.