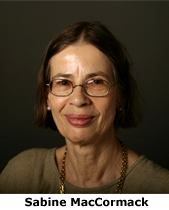 Sabine G. MacCormack, Theodore M. Hesburgh, C.S.C., Professor of Arts and Letters at the University of Notre Dame, has been elected to theAmericanAcademyof Arts and Sciences (AAAS). She will be formally inducted at a ceremony this fall inCambridge,Mass.

Founded during the American Revolution by John Adams, John Hancock and others, the AAAS is the nations leading learned society. It recognizes individuals who have made outstanding contributions to science, scholarship, public affairs and the arts.

An internationally renowned scholar of ancientRomeand the Spanish empire, MacCormack specializes in late antiquity and colonialLatin America.Her scholarly publications includeThe Shadows of Poetry: Vergil in the Mind of Augustine,Religion in theAndes: Vision and Imagination in Early Colonial Peru,andArt and Ceremony in Late Antiquity.

MacCormack, a past recipient of a $1.5 million Distinguished Achievement Award for scholars in the humanities from the Andrew W. Mellon Foundation, was named a fellow of the Medieval Academy of America in 2000 and of the American Philosophical Society in 1997, and was awarded a Guggenheim Fellowship in 1999.Previously a professor of classical studies and history at theUniversityofMichigan, MacCormack holds a joint appointment at Notre Dame in the departments of history andclassics and is a faculty fellow in the Universitys Kellogg Institute for International Studies.She earned her bachelor’s and doctoral degrees fromOxfordUniversity.