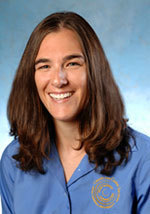 A 1997 graduate of the U.S. Coast Guard Academy, Flanagan earned a master’s degree in student development from the University of Maine in 2000. Before joining Notre Dame’s administration staff, she had directed John Carroll’s career center since 2006, assuming that position after five years in career services at Roger Williams College in Bristol, R.I. There and at John Carroll, she has advised students majoring in liberal arts, business, science and engineering, and provided career services to graduate students.

Flanagan is president-elect of the Midwest Association of College and Employers. She also has done fundraising work for Usborne Kane-Miller Children’s Books in support of Providence House, a crisis nursery for abused and neglected children in Cleveland. She and her husband, Scott, have two children, Colin, 11, and Kiley, 9.