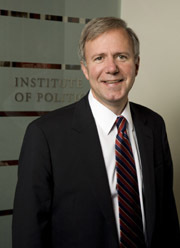 Bill Purcell, director of Harvard University’s Institute of Politics at the John F. Kennedy School of Government, will deliver a lecture titled “American Politics – Living Faithful Citizenship,” at 7 p.m. Monday (March 2) in the auditorium of the University of Notre Dame’s Eck Center. He will share his insights on living out a vocation in public service.

Sponsored by Notre Dame’s Center for Social Concerns, the talk is free and open to the public.

Purcell has spent more than 30 years in public service, law and higher education. From 1999 to 2007, he served as mayor of Nashville, Tenn., during which time the city experienced unprecedented economic growth and development, including the construction of more than 26,000 affordable housing units. In 2006, Purcell was named “Public Official of the Year” by Governing Magazine.

Prior to his appointment at Harvard, Purcell served as founding dean of the College of Public Service and Urban Affairs at Tennessee State University and was founder and director of the Child and Family Policy Center at Vanderbilt University. He has served as a legislator and majority leader in the Tennessee House of Representatives and as senior assistant public defender in the Nashville Metro Public Defender’s Office.

Purcell earned his bachelor’s degree from Hamilton College and his law degree from Vanderbilt University, where he recently received the Distinguished Alumnus Award.

Founded in 1983, Notre Dame’s Center for Social Concerns is the community-based learning and research center of the University. The center is one of the top 25 service-learningprograms in higher education, with some 17,000 students having participated in its service-learning courses locally, nationally and internationally.