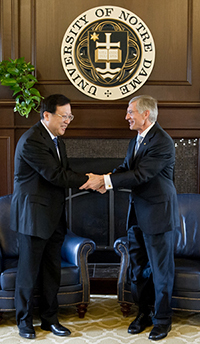 The principal reason for Vice Minister Hao’s visit, which was organized and hosted by Notre Dame International, was to sign and celebrate an agreement between the University of Notre Dame and the Ministry of Education’s China Scholarship Council (CSC), whose Secretary General, Liu Jinghui, was also a member of the delegation. The CSC already supports numerous graduate students from China pursuing doctoral degrees at Notre Dame, but the agreement signed today by Notre Dame’s provost, Thomas G. Burish, Vice Minister Hao and Secretary General Liu will provide scholarships enabling some 20 additional Chinese students to enroll in Notre Dame’s Graduate School.

While the CSC supports graduate students at other universities around the world, it has very few such exclusive agreements.

During a signing ceremony in Notre Dame’s Carole Sandner Hall, Burish praised Notre Dame’s Chinese students and noted that their participation in the life of the University enriched and strengthened its mission. “Notre Dame’s philosophy is to educate the whole person and to develop leaders,” he said. “A university is best evaluated by the success of its graduates, and our Chinese students stimulate and challenge their peers as they themselves have become the leaders we are so proud to graduate.” 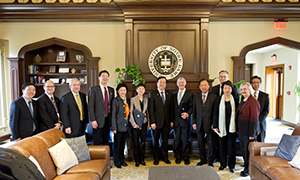 “I have long believed that Notre Dame is a world class university,” Hao said in translated remarks, “and I’ve always wanted to visit here. It was difficult to do so during our American visit, but after enjoying its hospitality and touring the university and meeting its students, I know it was worth it.”

Upon arriving on campus, the Chinese officials were greeted at the DeBartolo Performing Arts Center by J. Nicholas Entrikin, vice president and associate provost for internationalization; Don Pope-Davis, vice president and associate provost; and a group of Notre Dame faculty members and students. After a welcome and brief tour of the center, they toured the campus, visited the Basilica of the Sacred Heart and heard the Notre Dame Handbell Choir give a performance of Chinese music in their honor.

Following the signing ceremony, the visit was concluded with a luncheon hosted by Burish and an exchange of gifts.