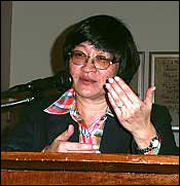 Mack is the founder ofGuatemalas Myrna Mack Foundation, which she formed in a quest for justice for the brutal murder of her sister Myrna Mack and for the thousands of other citizens who lost their lives at the hands of the countrys military.

An anthropologist, Myrna Mack was stabbed to death Sept. 11, 1990, by members of a military death squad in response to her investigations of the destruction and massacre of entire indigenous communities by the Guatemalan military.

Since the Myrna Mack Foundations establishment in 1993, Helen Mack has succeeded in making significant progress in the fight for human rights, reform of the judiciary system and fortification of the rule of law. In addition, she obtained the conviction of one the soldiers accused of committing the crimeand several years later, the conviction of one of the three officers accused of masterminding Myrna Macks murder.

Ms. Mack is a symbol of the impact one courageous person can have in the political process,said Rev. Edward A. Malloy, C.S.C., president emeritus of Notre Dame and a member of the prize committee.Since her sister, Myrna Mack, was brutally murdered by members of the military, she has become an unlikely champion for human rights and justice in a country where that can be a hazardous occupation.

Mack is the recipient of numerous awards and accolades, including the Swedish Parliaments Right Livelihood Award, known as analternative Nobel Prize.