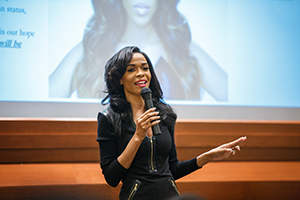 Michelle Williams speaks at a Notre Dame Lunch and Learn

Michelle Williams, award-winning singer, actress and entrepreneur, has been underestimated before. But she has never let that stop her from believing in and achieving her dreams.

On Wednesday (April 20), Williams — widely known as being one-third of Destiny’s Child, one of the most successful female musical groups of all time — was the keynote speaker at a Lunch and Learn hosted by the University of Notre Dame’s Office of Institutional Equity in partnership with the University’s Building Leadership Excellence professional development program.

Referencing the event’s theme, “Women of Color Leading in Excellence and Working toward a More Equitable Society,” Williams encouraged traditionally underrepresented groups to be empowered to speak up for themselves when given the opportunity and to avoid apologizing for who they are.

“I’ve been in some rooms and meetings where I didn’t have a voice at the table because of my inexperience or newness. But, of course, when I proved myself, my experience and value afforded me a voice at the table,” she said. “Use your voice when given the opportunity. Women of color, I never want us to sit at the table with negative energy or disposition saying, ‘Well, I’m a woman, so …’ Be confident.”

In Williams’ own life, she said that speaking up led to a chance invitation to audition for a background singing job with R&B singer Monica. That job eventually led to Williams meeting Beyonce Knowles and Kelly Rowland, the other two members of Destiny’s Child, who were the opening act for one of Monica’s concerts. Williams also revealed that she wishes she had advocated more strongly for herself with music executives to be known professionally by her birth name, Tenetria, rather than her middle name of Michelle.

“Trust your instincts. Trust them,” she told the group. “For me, I would know after I didn’t trust my instincts that my instinct was correct, but I was too fearful to use it.”

Since Destiny’s Child has disbanded, Williams has gone on to have a successful solo career as a gospel artist. She has expanded her portfolio to theater, becoming the first African American to play the role of Roxie Hart in the hit musical “Chicago” and starring as Shug Avery in the touring company of the musical “The Color Purple,” and taking the lead role in Aida three separate times. Williams is also a minority owner in the WNBA team the Chicago Sky and launched her Believe bedding collection on EVINE in 2015.

Notre Dame Executive Vice President John Affleck-Graves encouraged those in attendance to heed Williams’ advice and to believe in their ability to contribute something positive. “There are times in all of our lives when we don’t feel that we have confidence. If that happens to you, don’t feel strange. You’re not unique in that,” he said. “But do speak up because we need your voice. You make us better when you speak up.”

Karrah Miller, director of the Office of Institutional Equity and Title IX coordinator, said she was excited to see such a wide cross-section of campus stakeholders in attendance at the event and committed to helping the University work toward a more equitable environment.

“There’s a difference in having a seat at the table and having a voice at the table,” Miller said. ‘What we’re striving for here at the University of Notre Dame is that everyone’s voice is valued — whether you work in building services or you’re a vice president, you work with our students or you flip burgers. It doesn’t matter what part of campus you come from, what walk of life you come from, you are valued here.”

For more about the Office of Institutional Equity, visit “equity.nd.edu”http://equity.nd.edu.