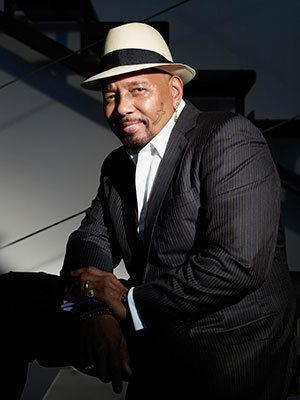 Aaron Neville, a four-time Grammy Award-winning singer and musician, will receive the University of Notre Dame’s 2015 Laetare Medal, the oldest and most prestigious honor given to American Catholics, at Notre Dame’s 170th University Commencement ceremony May 17 (Sunday).

“Aaron Neville proudly embraces and honors his faith through his God-given musical talents,” said Notre Dame’s president, Rev. John I. Jenkins, C.S.C. “Through tumultuous times in his life, Aaron turned to God, the Blessed Virgin Mary and St. Jude for strength, forgiveness and salvation. His example of repentance and devotion shine bright for all who see him perform.”

A rhythm and blues and soul artist, Neville has had four platinum-certified albums and four Top 20 hits in the United States, including three No. 1 songs on the Billboard Adult Contemporary charts and a 2015 Grammy Hall of Fame Recording inductee, “Tell It Like It Is,” which topped the R&B chart in 1967. He is also a member of the musical group The Neville Brothers with his brothers Art, Charles and Cyril.

He won the 1989 Grammy Award in the Best Pop Instrumental Performance category for the song “Healing Chant” by the Neville Brothers, as well as the 1989 Grammy for Best Pop Performance by a Duo or Group with Vocals when he teamed with Linda Ronstadt for the song “Don’t Know Much.” The following year, he and Ronstadt claimed the 1990 Grammy in the same category for “All My Life.” Later, Neville and Trisha Yearwood won the 1994 Grammy in the Best Country & Western Vocal Collaboration category for the song “I Fall to Pieces.” He was named Rolling Stone Critics Poll Best Male Singer in 1992 and 1993, and has been inducted into the Delta Music Museum Hall of Fame and the Louisiana Music Hall of Fame. He was also awarded the James Cardinal Gibbons Medal by Catholic University of America in 2002.

“My music is my connection with God. It’s something I’m giving to Him,” the 74-year-old Neville has been quoted as saying. “I want to see the world through God’s eyes, and I want people to see Him in me.”

Born in New Orleans, Neville attended St. Monica’s Catholic School. He credits successfully surviving trying times of drug addiction and other hardships to God’s grace. He is a devotee of St. Jude, one of the original 12 Apostles known as the patron saint of hope and impossible causes. Neville dedicates each of his albums to St. Jude and one of the earrings he wears is a St. Jude medal.

Neville has included a spiritual track on many of his records, including “Lovely Lady Dressed in Blue,” “Song of Bernadette” and “The Lord’s Prayer.” He has performed his rendition of “Ave Maria” on stages all over the world, and recorded an album with Father Jeff Bayhi, “Doing It Their Own Way,” a contemporary meditation and musical adaptation of the Stations of the Cross.

The Laetare (pronounced Lay-TAH-ray) Medal is so named because its recipient is announced each year in celebration of Laetare Sunday, the fourth Sunday in Lent on the Church calendar. “Laetare,” the Latin word for “rejoice,” is the first word in the entrance antiphon of the Mass that Sunday, which ritually anticipates the celebration of Easter. The medal bears the Latin inscription, “Magna est veritas et prevalebit” (“Truth is mighty, and it shall prevail”).