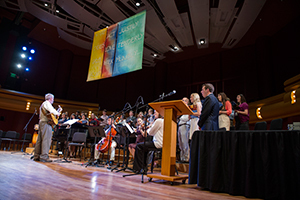 One hundred twenty-four University of Notre Dame graduating seniors embarking on a year or more of service in this country and abroad were honored during the University’s annual Service Send-Off ceremony on May 16 (Saturday) in the DeBartolo Performing Arts Center’s Leighton Concert Hall.

Rev. John I. Jenkins, C.S.C., president of the University of Notre Dame, commended the seniors for their commitment to service and for living out what is at the core of the University’s mission: “… to cultivate in its students not only an appreciation for the great achievements of human beings but also a disciplined sensibility to the poverty, injustice and oppression that burden the lives of so many. The aim is to create a sense of human solidarity and concern for the common good that will bear fruit as learning becomes service to justice.”

Some of the graduates will mentor orphans in Latin America and Africa, while more than a quarter will join the Alliance for Catholic Education or programs that share its model to serve as educators in the nation’s Catholic schools. Some will serve in Alumni Service Corps, City Year, Providence Alliance for Catholic Teachers, the Peace Corps and Teach for America. Others will live and work side by side with people with disabilities, mentor children worldwide, work to break the cycle of abuse or repair substandard housing in Appalachia. Still others will work with the rural poor and suffering in Jamaica and Haiti, foster spiritual formation in the nation’s parishes or provide a host of other services that match the mission of Notre Dame.

Katherine Eva Maich, a Ph.D. candidate in sociology at the University of California, Berkeley, offered a reflection for the gathered students on her own postgrad service and the questions it raised that continue to shape her life. Maich’s postgraduate experience included work through the Jesuit Volunteer Corps in Camden, New Jersey, with Fair Share Housing’s Ethel Lawrence Homes, an organization devoted to economically and racially diversifying New Jersey’s highly segregated urban/suburban divide.

Maich, who was an English major with a minor in Catholic Social Tradition at Notre Dame, said, “I didn’t quite know what was ahead for me after graduation. My minor in Catholic Social Teaching … had enabled me to develop an informed analysis of social justice, the preferential option for the poor and vulnerable, and rights of workers and the marginalized. I knew I wanted to put those politics into practice in a meaningful way, as I had in working with the Higgins Labor Center, on a CSC Migrant Immersion Seminar during the most physically demanding four hours of my life when I picked tomatoes in Immokalee, Florida, and as I had during three Summer Service Learning Programs in South Bend, Raleigh and Durham, and Boston. But what I didn’t know was how much I would be affected by the questions Camden raised, and by the chance it offered me to show me the need to create community throughout my life.”

Maich went on to say that she learned to see herself differently through the moments of encounter lived out while in Camden and “that has affected my research practice, my teaching at Berkeley and the sense of how my work takes on questions of social justice, marginality and the rights of workers that I first seriously thought about at Notre Dame.”