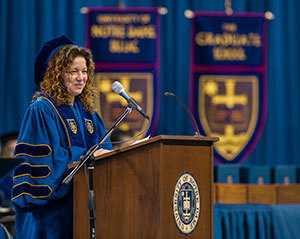 Kerry Ann Rockquemore, president and CEO of the National Center for Faculty Development and Diversity, delivered the Commencement Address. Rockquemore was also recognized as the recipient of the Graduate School’s Distinguished Alumna Award during the event.

After Rockquemore became a tenured professor, her focus shifted to improving conditions for pre-tenure faculty by creating supportive communities for writing productivity and work/life balance and she founded the center she now heads.

In her address, Rockquemore offered the graduates three things she wished she knew when she was in their position.

“I decided the best way to serve you was by speaking not as scholar to scholar but as person to person,” she said.

Rockquemore first urged the graduates to develop a very clear idea of what success means to them. She noted that her academic career and reputation as a scholar were perceived as being successful, but it was not her version of success.

“I was living a version of success that was not mine,” she said. “To be honest, doing research and publishing was not in my zone of genius.”

Rockquemore’s second point stressed the idea of learning to play with possibility. She described how she and her husband take an hour-long “crazy walk” each Sunday during which they talk about growing their notions of what is possible.

“Develop a habit of thinking and being as if not limited by your current circumstances,” she told the graduates.

Rockquemore’s third and final point of emphasis was on the importance of finding mentors who are the exception and not the rule. She urged the graduates to find mentors whose entire careers were about change and not simply profit.