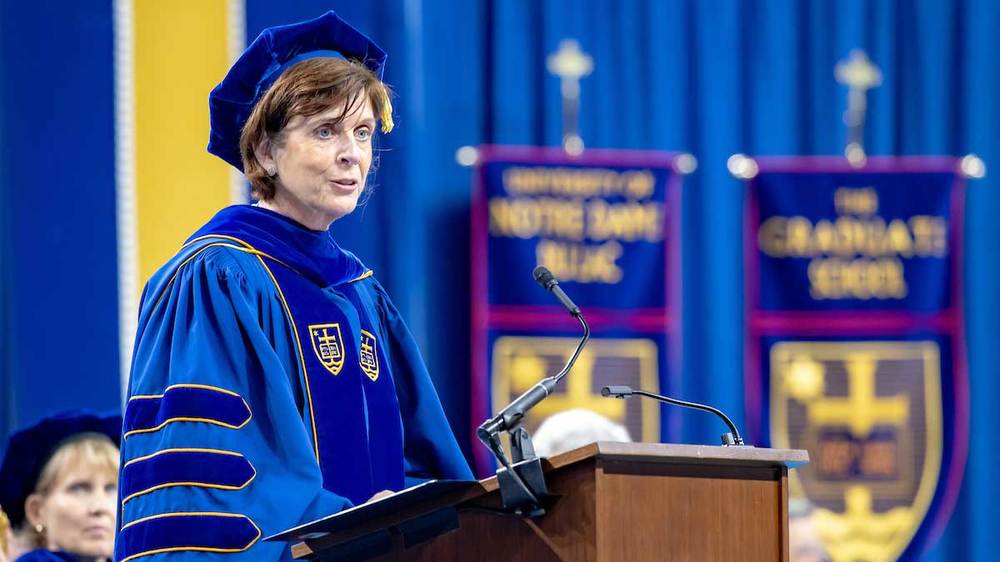 Louise Richardson, the first female vice-chancellor of Oxford University, delivered the commencement address, lamenting the elevation of emotion over truth in personal and political discourse and appealing to the graduates to “insist on reason and evidence as the basis for your judgments and decisions.”

To that end, she stressed the importance of higher education in fostering within current and future generations of young men and women an understanding of the value of critical thinking and “intellectual self-reliance.”

“It’s never been more important for universities to represent and inculcate a respect for reflection and delay, to distinguish between the evidence-based and the fabricated,” said Richardson, an Irish political scientist who previously served as St. Andrews University’s first female principal and vice-chancellor.

In a world increasingly divided by class, Richardson expressed her belief that “education remains the best engine of social mobility that we have,” and her hope that, throughout their careers, the graduates would “remain committed advocates for education as a source for social mobility.”

In addition, she encouraged them to “pause for a moment and reflect upon what this day means to your family and friends, and draw them into your celebration” as an exercise in empathy, which she described as a “critical life skill, a hallmark of a vibrant democracy (and) one of the first casualties of warfare.”

Striking a similar tone, Notre Dame President Rev. John I. Jenkins, C.S.C., in his charge to the class, reminded graduates that “while this accomplishment is truly your own, you know you didn’t do it all on your own.”

“You may have done the studying, but your family and loved ones did the sweating and stressing along with you,” Father Jenkins said. “They cheered you on at your successes and cheered you up at your setbacks. They are sitting behind you today, and they have been behind you every step of the way to help you reach this milestone.”

Alluding to the University’s commitment to justice in all of its forms, Father Jenkins expressed hope that the graduates would “use the advantages of the education you received here for the common good.”

“We hope that you will use your talents and skills not simply to serve your own interests but to care for the neediest and create a more just society,” he said. “We hope that you acquired here not only the knowledge to make a good living, but the wisdom to live a good life.”

The following doctoral graduates were honored with the Eli J. and Helen Shaheen Graduate School Awards, which recognize the top graduating students in engineering, the humanities, social sciences and science: