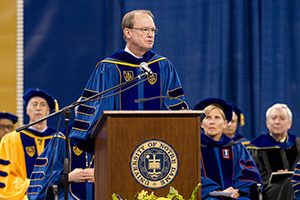 Dick Notebaert – chairman emeritus of the University of Notre Dame Board of Trustees and retired chairman and chief executive officer of Qwest Communications – told the University’s Graduate School degree recipients during Saturday’s (May 20) Commencement Ceremony that everyone needs a coach on the path to success, and he offered insights gained from two of his own mentors.

Notebaert delivered the commencement address in the Compton Family Ice Arena, where the University recognized and celebrated the recipients of 240 doctoral degrees and 478 master’s degrees.

He spoke of his wife, Peggy Notebaert, as his first coach. The two met freshman year in college.

“Besides being the best thing that ever happened to me, she has always been an invaluable barometer on everything I do. That has convinced me that each of us needs a confidante – a friend, a family member, a professional associate – who will tell us when we are moving too fast, too slow or in the wrong direction and who cares enough about us to be honest about things they feel we need to know or do.”

The Notebaerts are the benefactors of the Notebaert Premier Fellowships, which is the largest single gift ever bestowed upon the University for graduate education; they have deeply embraced the Graduate School’s holistic model of post-baccalaureate training.

Citing his years under the mentorship of Bill Weiss in the 1980s as essential leadership formation, Notebaert said, “Weiss taught me to seek out other people’s views of problems and/or solutions. He would encourage pushback and wanted input from people he knew would see the world through different lenses. He never got upset or angry or defensive because he learned that the interaction was important to creating a solution and a path to implementation. I learned this really made the path to success a team effort.”

Notebaert exhorted graduates to pursue their passions — and to do so strategically, flexibly and with integrity.

“You need to have passion. Passion creates energy!” he noted, adding that passion needs focus in order to achieve goals, whether that takes the form of a five-year plan or a 90-day plan.

Additionally, drive and goal orientation must be tempered with balance and flexibility, Notebaert said.

“The world we live in is one of rapid change. . . . So we need to have both a clear picture of what we want to achieve and the flexibility to adapt to new realities.”

In conclusion, Notebaert urged the degree recipients to apply the “newspaper test” to all areas of conduct. This, he said, means adopting the simple conscious practice of examining choices with this question: “If I were to do this, and it were to appear on the front page of tomorrow’s paper – or, in today’s world, some blog or YouTube video – would I be OK with that?"

Notebaert pointed out that personal integrity is far too valuable an asset to risk, but also that mistakes can be excellent teachers.
“You need to always know that you did the right thing for the right reason. As I have always said, it is OK to make a mistake if the motive was right. Learn from it and move on.”

Additionally, the Graduate School recognized several recipients of awards during the Commencement ceremony: