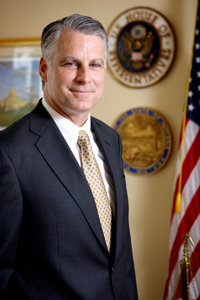 Good morning everyone. Thank you, Dr. Burish for that nice introduction.

Thank you Father Jenkins and Dean Sterling for giving me the opportunity to be here today and to be part of your graduation ceremony. Walking onto this beautiful campus gives me the same excitement that I had 40 or 50 years ago when I would visit my grandfather here. So thank you for letting me wake up my personal echoes and feelings about this great school.

It is wonderful to be back at Notre Dame. Especially in the spring, and not in the winter.

It is wonderful to see so many old friends and familiar faces and to reconnect with many people who helped me get started when I was sitting in the same chairs that you are sitting in, wearing the same graduation gown, and having the same sense of accomplishment and happiness that all of you and your families I know are experiencing right now.

Their teachings struck the right balance between the academic and the practical. Combined with the values of Notre Dame that is instilled in every Domer, I was and still am well prepared to take on the challenges of the day, whether as a congressman, a member of the 9/11 commission, or as the U.S. Ambassador to India these past two years.

You may not realize it today, but I know it is that balance and those Notre Dame values that will make you successful in the journey for which you are about to depart.

For me, saying “back at Notre Dame” is the same as saying back at home. For Notre Dame has always been my home.

My grandfather was a philosophy professor at Notre Dame. My father earned an undergraduate and law degree here, and was later Dean of Students. My mother was the Coordinator of Volunteer Activities for many years. Carrying on the tradition, I am proud to report that my oldest child will be part of the class of 2015 this fall.

As they say in India, Notre Dame is “in my blood.” My family history is here. I grew up here, went to school here, and now I am happy to know I will be returning here often for at least the next four years.

In honor of my grandfather, let me start by quoting Aristotle, who once said, “There are only two parts absolutely necessary to every public discourse; and these parts are the proposition and the proof, which are equivalent to the problem and its solution in geometry.”

Of course, Aristotle did not live in the modern day, of 24 hour news cycles, of 15 minutes of fame. Notre Dame has given me 10 minutes so unlike Abraham Lincoln whose famous Gettysburg Address was 280 or so words, I will take advantage of my good fortune and use my allotted time.

Like me when I graduated, you will leave Notre Dame today prepared to take on the challenges of the world although the world is much different than it was 25 years ago.

Twenty-five years ago, the major events of the day were driven and influenced by nations and governments. Yet today, transnational actors and actions play just as an important role as governments and nations in ways that are often unpredictable and unannounced.

A pastor in Florida can threaten to burn a Quran, which is picked up and broadcast by an Iranian news channel that is watched in Kashmir, resulting in protests, riots, and several needless deaths.

Social media like Facebook, which was intended to help you stay in touch with your friends, can be used to keep revolutions alive and bring down a government as we saw by recent events in the Middle East.

Which transnational action or actor will influence our future in ways we can not foresee today?

Maybe it will be the e-Pad, a tablet computer being developed in India for students to help India improve its educational system through technology. The goal is for these e-Pads to cost about 500 rupees or about 10 dollars. If successful, how does that revolutionize education? Development? School administration?

Maybe we will see breakthroughs in solar and wind power technology, making these types of renewable energy cost competitive with other forms of energy. How will that affect world stability, the economies of OPEC and other oil producing countries, or how about the thousands of men and women working for oil companies.

A second change is the world is not just flat, as Thomas Friedman has described it with a level playing field for all nations to compete in a zero-sum game. Rather, the world is now a dynamic, three dimensional Venn diagram of overlapping circles, with the intersection of these circles signifying the benefits derived from collaboration and partnerships, from one country to the next.

As Ambassador to India, I have spent a considerable amount of time traveling throughout that country. I have seen 80,000 Indians receive food at the Golden Temple in Amritsar in the northwest, viewed solar lanterns in villages far from the power grid that provided school children the chance to read and study at night and opportunities for micro businesses, and felt the energy and financial power of Mumbai in the west.

When I was in Assam, I visited a gasoline refinery. It had purchased American manufactured equipment, which led to an increase in production by almost 50 percent. With this increased capacity, it can supply fuel efficiently to Northeast India and is even exploring the possibility to export to Bangladesh, which would help Bangladesh meet its energy needs. Not surprisingly, this gas refinery is considering buying more American manufactured equipment.

As President Obama said in his historic visit to India in November 2010, “in our interconnected world, increased commerce between the United States and India can be and will be a win-win proposition for both nations.”

As you can see from my refinery visit, in our world of overlapping circles, this sentiment is true, not just between the United States and India, but it can be and will be true between all nations.

A third change from 25 years ago is that the relentless march of democracy is no longer in doubt. Shortly after I graduated from Notre Dame, the iron curtain came down, the Cold War ended, and many former communist countries became new democracies.

The march of democracy continued and occurred elsewhere in places like South Africa and Latin America. Today, the march continues in the Arab world with the Arab spring, and will continue to find followers wherever power is held by force; wherever the interests of a few are held above the interests of the majority; wherever human rights for minorities are not respected.

President Obama was right when he said in Cairo: “…all people yearn for certain things: the ability to speak your mind and have a say in how you are governed; confidence in the rule of law and the equal administration of justice; government that is transparent and doesn’t steal from the people; the freedom to live as you choose.”

So the march of democracy will continue as long as there are places where people do not have those certain things.

These are some of the characteristics of the world that you are about to enter as you leave Notre Dame. Who knows how it will look in 25 years when one of you is standing in my shoes and giving this commencement address.

Regardless of how the world changes or looks in 25 years, you have the education to take on the challenges of the world today and in the future.

You have the abilities and talent to see and take advantage of the opportunities that will be present from an ever-changing world.

And you have the Notre Dame values to make a difference, to make the world a better place.

To motivate you, let me tell you a story about …… toilets!

India is a country with many inspiring people. There is, of course, Mahatma Gandhi, the father of the nation. His teachings of tolerance really are the key to the success of democracy in India and he has influenced civil rights movements around the world including in the United States.

There is Mother Teresa, who lived and worked in India although her legacy now touches the lives of children, women, and the poor all over the world.

There is Rabindranath Tagore, the first non-European to win the Nobel Prize for Literature.

But there are also many inspiring people, lesser known to the world, like Dr. Bindeshwar Pathak.

Dr. Pathak, although from a very high caste, knew at a very young age that there was nothing wrong with touching the untouchables. He has dedicated his life to restoring the human rights and providing dignity to scavengers, which is the bottom-rung caste in India responsible for cleaning up human waste.

To do so, he used technology to develop a safe and environment-friendly toilet to replace pit latrines, reducing the need for scavenging and improving sanitation and hygiene for both rural and urban poor.

He provided education to the children of scavengers, helping to break the never-ending family cycle of scavenging.

He provided alternative economic opportunities so that women no longer have to clean toilets for the rest of their lives to provide for their families.

All this has helped tackle a bigger problem – breaking down the caste system in India.

As you leave Notre Dame today, I hope you will remember the story of Dr. Pathak.

He did not start out to change the world. He started out to help some scavengers in a few villages in Bihar, a small state in the north of India on the Nepal border.

As you start out today, you do not have to change the world overnight. But I encourage you to try to make a difference.

As you walk out these doors and leave this campus for your final time as a student, follow the counsel of President John Quincy Adams, who said, “March then with firm, with steady, with undeviating step, to the prize of your high calling. Consecrate above all, the faculties of life to the cause of truth, of freedom, and of humanity.

“To the prize of your high calling.”

The prize is your efforts, your attempts, and your fights to make a difference, to make a contribution, to volunteer your time, your sweat, and your services to change the world around you.

Your high calling is a cause that you feel passionate about. Find that cause – whether its toilets or the arts, education or community activism, children or senior citizens, medicine or business. Find your passion.

You have earned a degree from the greatest university in the world. One that blends academic rigor, intellectual curiosity, and compassionate values.

With that degree, you have the abilities, the talent, and the responsibility to make a difference, to change your world for the better, whether your world is in a business, in a classroom, or in a community.

This is a great time to be starting out in the world. The possibilities are endless.

March then, to the prize of your high calling.