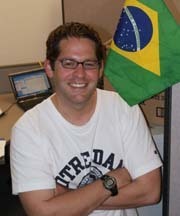 James Hussar had the best possible final semester a doctoral candidate can have. By January, he had accepted a tenure-track teaching position at his number one choice: California State University, Fullerton, in the modern languages and literatures department.

That allowed him to cancel interviews at more than a dozen other campuses, visits that would have taken eight weeks out of his final semester and home life with his wife and two small children. Instead, he stayed in South Bend, taught undergraduates a final time (he considers teaching at Notre Dame autopianexperience) and finished a dissertation that would win one of the most prestigious awards bestowed upon a graduate studentthe Shaheen Graduate School Award.

Anybody aware of the challenges of finding a tenure-track teaching job recognizes Hussars story as a happy ending. His strikes a particularly celebratory chord, because he is the first graduate of Notre Dames six-year-old Ph.D. in Literature Program, a unique doctoral program that eschews literary studies defined by language or national borders. Its students experience a wide-open opportunity to follow multiple languages and literatures across native tongues and national boundaries.

The program was birthed by such distinguished faculty as Margaret Doody, Glynn Family Professor of Literature and its first director; and Vittorio Hösle, Kimball Chair in Arts and Letters. Supportersintuited,says todays director, Joseph Buttigieg, that language and literature studies would have to head in new directions in a shifting, multilingual, global society.

The proposal won adoption and has been enrolling students since 2002; Hussar was in the inaugural class. During that period, Buttigieg has seen validation that a new conception ofworld literatureis developing. For example, Princeton University Press launched a book seriesTranslation/Transnation,including a volume calledWhat is World Literature?

As students progressed, the program developed many invaluable supporters including, Buttigieg says, the Nanovic Institute for European Studies, the Keough-Naughton Institute for Irish Studies, and the Department of Film, Television, and Theatre. (Countless faculty mentor these students, but as staff go, theres only Buttigieg and administrative assistant Jessica Monokroussos, with support from professional specialist Olivier Morel.)

I have been blessed by the number of faculty who have been willing to help me with letters of recommendations, directed reading, advice on courses. This is a very gracious faculty,he says.

Until Hussar graduated, no one, including Hussar, knew if students from a freshly minted program would be accepted by the academy.

We were very aware there was no precedent. There were no other students to meet,says Hussar.In the first few years, we sensed the newness.

Hussar had been a middle school and high school Spanish teacher who entered the program with an interest in not just Spanish, but Portuguese and Luso-Brazilian literature. Not many doctoral programs met his requirements, he says.

One of the characteristics of a Ph.D. in Literature candidate is that one often can ask: Where can you study for that? Consider the interest of Abigail Palko, who expects to graduate next May. Her language studies focus on English, Irish and French; her literary interest is women writers from Ireland, the Caribbean and Africa. Gender Studies has selected her as their predoctoral teaching fellow for the coming year.

Another characteristic, says Buttigieg, is that students tend to approach their subjects through the lenses of multiple languages and cultural traditions. Hussars dissertation was about Latin American Jewish literature. But the interest in Jewish literatureencouraged by theology professor Rabbi Michael Signerfollowed the love of Spanish and Portuguese.

The program, Hussar says, wasan ideal fit for me,because he and its other students had such influence in the direction their research took. Ultimately, he hoped to be a good candidate for a Romance languages teaching position. But in his doctoral program, he wantedto be able to work outside that narrow space.

Im not sure I sacrificed anything,by choosing the Ph.D. in Literature over a traditional Spanish Ph.D. program.But Im sure I gained,he concludes.