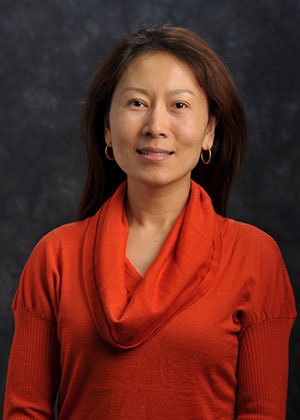 A team led by Huili (Grace) Xing, professor of electrical engineering at the University of Notre Dame, has been awarded a $2,496,428 grant from the U.S. Department of Energy’s Advanced Research Projects Agency-Energy (ARPA-E) program for projects aimed at developing next-generation power conversion devices that could dramatically transform how power is controlled and converted through the grid.

Her project was funded under ARPA-E’s “SWITCHES” program, short for “Strategies for Wide-Bandgap, Inexpensive Transistors for Controlling High-Efficiency Systems,” whose aim is to lower the cost and improve the efficiency of power electronics.

The research project of Xing’s team is titled “PolarJETT Novel Vertical GaN Power Transistor,” which was originally an idea of Kazuki Nomoto, Debdeep Jena and Xing, all in the Department of Electrical Engineering at Notre Dame. It is designed to develop an innovative high-efficiency gallium nitride (GaN) power switch. Their design is significantly smaller and operates at much higher performance levels than conventional power switches, making it ideal for use in a variety of power electronics applications. Their project also will reuse expensive GaN materials and utilize conventional low-cost production methods to keep costs down. If successful, the miniature, high-performance, low-cost GaN power transistors could make silicon switches obsolete.

A member of the Institute of Electrical and Electronic Engineers, The Electrochemical Society, American Society for Engineering Education and Materials Research Society, Xing joined the Notre Dame faculty in 2004. She earned a bachelor’s degree in physics from Peking University, a master’s degree in material science from Lehigh University and a doctorate in electrical engineering from the University of California at Santa Barbara.