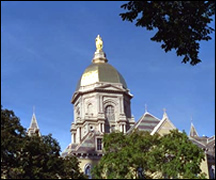 The famous Golden Dome atop the University of Notre DamesMainBuilding, arguably the countrys most recognized campus landmark, will be regilded beginning Monday (March 7).

The project, which will include regilding the Our Lady statue atop the Dome, is expected to be completed by early September at a cost of $300,000.

A scaffolding system will be installed on the south side of theMainBuildingat the beginning of the project and will take approximately three weeks to complete. Those exiting the building during that time are encouraged to use the second floor center door and exterior stairs to reach the Main Quad and to avoid the buildings first floor exits.

The most recent Dome regilding was completed in 1988 by artists from Conrad Schmitt Studios of New Berlin, Wis., who also will handle the current regilding.

The regilding process involves the application of 3,500 square feet of 23.9-karat gold leaf. Less than eight ounces of gold, roughly a fist full, are used in the process. The gold is so malleable that this small amount can be pounded out and used to cover the entire Dome. The material is just 3-microns thick and so delicate that workers can apply it only in wind-free weather conditions. The regilding process is done strictly by hand; no machines are used in the effort.

The 17-foot tall, 4,000-pound Our Lady statue atop the Dome was modeled after a sculpture of the Virgin erected by Pope Pius IX inRomes Piazza di Spagna and was a gift from neighboring Saint Marys College.

The Golden Dome looms large in the collective Notre Dame psyche. It is so central to Notre Dames institutional identity that graduates are calledDomers.Notre Dame football players wear gold helmets in deference to the Dome.

TheMainBuildingunderwent a $58 million restoration project from July 1997 to July 1999. The project returned the public areas of the building to their 19 th century Victorian elegance, brought office areas to 21 st -century standards, and included structural reinforcements that have made the building sturdier. Other notable elements of the project included the addition of two elevators, the repair and reopening of the fifth floor, and the restoration of the elaborate artwork on the walls, the Christopher Columbus murals in the main corridor and, and the allegorical mural on the interior of the Dome.

TheMainBuildingand the other buildings on the central campus were entered on the National Register of Historic Places in 1978.