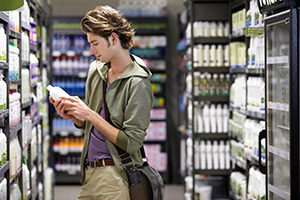 Studies show that men are not as environmentally friendly as women. Let’s face it, not too many “man caves” feature solar panels, recycle bins or posters of electric cars. It’s just not manly.

But could men be persuaded to go green? New research indicates the answer is yes — and it’s all about branding.

The study “Is Eco-Friendly Unmanly? The Green-Feminine Stereotype and Its Effect on Sustainable Consumption,” forthcoming in the Journal of Consumer Research by James Wilkie, assistant professor of marketing at the University of Notre Dame’s Mendoza College of Business, provides evidence that shoppers who engage in green behaviors are stereotyped by others as more feminine and also see themselves as more feminine. In a series of seven studies, Wilkie and his co-authors manipulated small details about the products, attempting to change men’s attitudes and behaviors. They found that men are more open to purchasing environmental products if their masculinity gets a branding boost.

“Previous research shows that men tend to be more concerned about maintaining a masculine identity than women are with their feminine identity,” Wilkie says. “We therefore thought that men might be more open to environmental products if we made them feel secure in their masculinity, so they are less threatened by adopting a green product.”

They used two approaches — affirming a man’s masculinity before introducing him to environmental products and changing the associations people have toward green products.

“We documented how both men and women find green products and actions to be feminine,” Wilkie says. “We thought that if you reframe environmental products to be more masculine, men would be more likely to adopt them. Instead of using traditional marketing messages about green products (which are typically perceived as feminine), we changed the messages to be more masculine in nature by changing the phrasing, colors, etc. When we did that, we found that men were more willing to ‘go green.’”

One study was conducted in China at a BMW dealership and focused on a model known for being an eco-friendly car. While surveying shoppers, the researchers simply changed the name of the car from the traditional, environmentally friendly name to “Protection,” which is a masculine term in China. Despite all other descriptions of the car remaining the same, the name change did increase men’s interest in the car.

In another study, the team compared men’s and women’s willingness to donate to green charities. They called one “Friends of Nature,” with a bright green logo featuring a tree. The second was named “Wilderness Rangers” showcasing a wolf howling to the moon. Women favored the more traditional green marketing, while more men were drawn to the masculine branding over the traditional.

“Body wash used to be considered a very feminine product, but companies changed that perception by marketing their products in a more masculine fashion,” Wilkie says. “They used more masculine fonts and colors in packaging and hired very masculine spokesmen, explicitly stating that the product was for men only. It worked — as it also did for diet soft drinks. Again, there was a perception that ‘diet’ products were for women. Marketers changed their phrasing to ‘zero-calorie’ drinks. Pepsi Max stated that it was the ‘first diet cola for men’ and Dr. Pepper 10 warned, ‘It’s not for women.’

“These campaigns appeared to get more men to purchase the product, yet did not scare away women. We think that green products can be successfully marketed in the same way.”