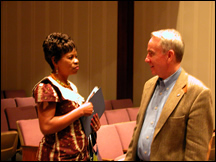 Two action plans emerged last week from a meeting on campus in which executives of nonprofit groups and pharmaceutical companies discussed global responses to AIDS and other lethal diseases.

Rev. Oliver F. Williams, C.S.C., co-convener ofQuality Healthcare in Developing Countries: Sustainability, The New Imperative,expects one subset of participants to turn its attention to UNICEF and another to head toWashington,D.C.

Over the next three months, the group with its sights on UNICEF support will sit down inGeneva,Switzerland, to express concerns about reaching more people with drugs and healthcare, Father Williams says.

The second group, comprised of about 20 participants, will meet this fall inWashington,D.C., with groups including Ambassador Randall Tobias, the U.S. Global AIDS coordinator. Tobias, who delivered the keynote address at the conference April 24, provided compelling testimony about the death toll caused by diseases such as AIDS, describing the daily loss of 8,000 liveslike 20 jumbo jets crashing every day.

The Washington contingent will also meet with members of Congress, hoping to convey concern that a greater percentage of U.S. dollars allotted to global health crises actually reach patients (since transaction costs tend to be high), and that paperwork to participate in U.S.-funded programs be less of a burden, says Father Williams, associate professor of management and director of Notre Dames Center for Ethics and Religious Values in Business.

Father Williams also looks to theWashington,D.C., encounter as an opportunity to help raise public awareness of the global AIDS epidemic and fatal diseases such as malaria.

The conference was underwritten by seven pharmaceutical companies for the purpose of exchanging thoughts and experiences with other frontline groups such as non-governmental organizations (NGOs).All these people are working at full speed all the time. This gives people who are on the firing line a little quiet and peace,says Father Williams of conference participants.

Father Williams convened the conference in partnership with Lee Tavis, professor emeritus of finance. Under the auspices of the Notre Dames Center for Ethics and Religious Values in Business and its Program on Multinational Managers and Developing Country Concerns, the two have been bringing corporations together with members of faith-based, governmental and non-governmental organizations since the 1970s, when the hot topic was the role of multinational corporations in developing countries. Issues of healthcare and the participation of pharmaceutical companies emerged after the explosion of AIDS cases in the late 1980s.

The goal of these sessions, Tavis explains, is tobecome a map of collaboration for the future. Were driving at capturing the power of these groups working together.

Over the years that Notre Dame has sponsored these sessions, Tavis said he has seen unity grow. __ I think everybody is ready for a new paradigm. Instead of focusing on patents and prices, were starting to look at delivery in very poverty-stricken countries. Theres where all of these groups can make a difference.