University of Notre Dame President Rev. John I. Jenkins, C.S.C., visited the Gettysburg National Military Park on June 22 (Saturday) to mark the 150th anniversary of the decisive Civil War battle and to celebrate Mass on the spot where his predecessor, Rev. William Corby, C.S.C., gave a general absolution and blessing to Union and Confederate troops on the second day of fighting. 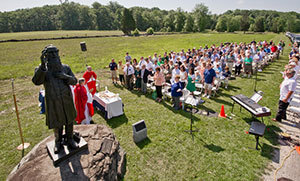 The Mass, sponsored and organized by the Notre Dame Club of Gettysburg, drew some 200 people to the site, where a statue of Father Corby was erected in 1910. A duplicate of the statue stands before Corby Hall on Notre Dame’s campus.

On July 2, 1863, Father Corby, then chaplain of the 88th New York Regiment, one of the five regiments in the legendary Irish Brigade, gave the general absolution moments before the Confederate assault on the Union troops defending Seminary Ridge. He later described the scene in his memoirs.

“My eye covered thousands of officers and men,” Father Corby wrote. “I noticed that all, Catholic and non-Catholic, officers and private soldiers, showed a profound respect, wishing to receive at this fatal crisis every benefit of divine grace …. (My) general absolution was intended for all … not only for the brigade, but for all, North and South, who were susceptible to it and who were about to appear before their Judge.” 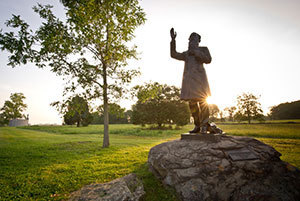 In his address, Father Jenkins proposed the example of Father Corby as salubrious for our own time, when “too often … conflicts among us quickly turn into a stare-down and a standoff; rhetoric becomes harsh and personal. In the midst of a close election or a political clash, members of one group talk about seceding; members of another group talk about moving to Canada. Those who work with opponents to seek a constructive resolution are seen as ‘giving up or giving in.’

“If instead we embrace the example of Father Corby, we can be sure of our convictions, but nevertheless acknowledge what is honorable in those who disagree. We can fight for our cause, and still cultivate personal relationships with the other side. It is only in relationship, in dialogue that answers can emerge that might resolve conflicts in ways beyond hostility, violence and war.

“This is the message of the silent dead of Gettysburg," Father Jenkins said. “There must be a better way to resolve our conflicts than the one that played out on this battlefield and in this war. Father Corby’s invocation of God’s mercy on all challenges us to seek that better way.”