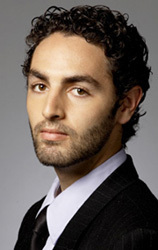 Mark Hanis, executive director of Genocide Intervention Network (GI-Net) will present a lecture titled"Responsibility to Protect: Darfur and Beyond"Friday (Nov. 7), at 1 p.m. in the Montgomery Auditorium of the LaFortune Student Center at the University of Notre Dame.

The event is sponsored by Notre Dame’s Center for Social Concerns and is free and open to the public.

Hanis is the founder and executive director of the GI-Net, an organization that seeks to empower individuals and communities with the tools to prevent and stop genocide.

Hanis is the grandchild of four Holocaust survivors and was raised in Quito, Ecuador. He read about the genocide in Darfur during his senior year at Swarthmore College and came to believe that the world was doing nothing in the face of genocide. In response, he co-founded and became the executive director of GI-Net.

GI-Net’s mission and programs are grounded in consultations with a variety of experts on the ongoing Darfur genocide, members of the Darfurian community and others who have extensive experience in policy, education, media and grassroots organizing. GI-Net members educate their communities, advocate for action from their elected officials, and fund-raise directly for civilian protection and human security.

Hanis and GI-Net have been featured in the New York Times and The New Republic, and Hanis has appeared on CNN Headline News, NBC and NPR.