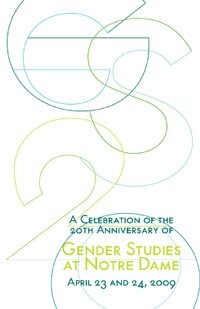 The University of Notre Dame’s Gender Studies Program will observe its 20th anniversary with a series of events on campus April 23 and 24 (Thursday and Friday). All events are free and open to the public.

The celebration will open April 23 with an address by the Provost’s Distinguished Women’s Lecturer, Christine Stansell, the Stein-Freiler Distinguished Service Professor in United States History at the University of Chicago. Her talk, titled “Matrophobia and the Women’s Movement: Generational Tensions in Feminism, 1968-2008,” will begin at 4 p.m. in the Great Hall of Notre Dame’s Hesburgh Center for International Studies.

A panel discussion titled “The History and Future of Gender Studies at Notre Dame and Beyond” will be held April 24 at 10 a.m., featuring faculty, alumni and students from the program.

“The 20th anniversary of Gender Studies at Notre Dame is a milestone for our university as well as for the discipline,” said Eileen Hunt Botting, associate professor of political science and director of the Gender Studies Program. “Notre Dame founded one of the earliest Gender Studies programs in the United States, and 20 years later it is flourishing with more than 100 undergraduate and graduate students, plus more than 200 alumni.

“The Gender Studies Honor Society has begun to network with our Gender Studies alumni, and several of our alumni will be participating in the panel discussions during the anniversary celebration. We also have posted biographies of our esteemed alumni on our Web site (http://nd.edu/~gender/), chronicling the positive impact of gender studies on their extraordinary lives and careers."

The Gender Studies Program is an interdisciplinary academic program in Notre Dame’s College of Arts and Letters that analyzes the significance of gender—and the cognate subjects of sex, sexuality, race, ethnicity, class, religion and nationality—in all areas of human life, especially in the social formation of human identities, practices and institutions.

Anniversary events are sponsored by the Boehnen Fund for Excellence in Gender Studies, the Genevieve D. Willis Endowment for Excellence, the Gender History Group, Department of History, Institute for Scholarship in the Liberal Arts, Kroc Institute for International Peace Studies, and the Provost’s Distinguished Women’s Lecture Series.