Thank you, Father John, for the honorary degree and for the privilege of addressing Notre Dame’s Class of 2016.

Congratulations to Vice President Biden and Speaker Boehner on their well-deserved awards. 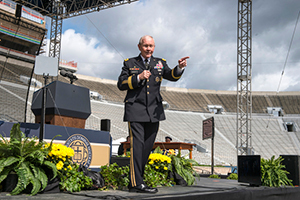 I know we will all treasure the experience and like these graduates here work to bring honor to this great university.

Congratulations to the parents and family members of our graduates. They couldn’t have done it without you!

Most important, congratulations to the Notre Dame Class of 2016!

I’m here with my wife, Deanie. We’re married nearly 40 years. To put my accomplishments in perspective, when I was named one of the 100 most influential leaders in the world by TIME magazine in 2015, I told my staff that there must be some mistake since I’m not even the most influential person in my own house!

Pretty cool being part of the class of 2016. I’m guessing I’m the senior member.

So as the senior member of the class, I want to make sure you’re ready to graduate.

You’ve all heard of James Corden’s “carpool karaoke.” He actually got the idea from me. Well, not exactly. But several years ago I invented “graduation karaoke.” Here’s how it works.

To paraphrase the psalms: On such a joyful day … “how can we keep from singing!”

Now that I know you are prepared to graduate — but clearly not ready to pursue a singing career — I will continue.

There’s a story told of a small parish priest in a rural part of Indiana whose church was being threatened by a flood. As the waters rose, one of his parishioners with a small boat floated up to the church and called for the priest to get into the boat and save himself. “No” said the priest, “l’ll be fine. The Lord will provide for me.”

Awhile later, as the flood waters rose to the second floor of the church, other parishioners came by in another boat and pleaded with the priest to get into the boat and save himself. “No,” replied the priest. “I place my faith in the Lord.”

Later still, the waters rose up the church steeple and, as the priest hung on tightly so that he wasn’t washed away, another boat came by. But still the priest refused to get into the boat.

Eventually, the flood waters covered the church, and the priest was swept away and drowned.

When he got to heaven, Saint Peter met the priest at the pearly gates.

The priest approached Saint Peter perplexed and even a little angry. “I had faith in the Lord,” he said, “why didn’t he assist me in my hour of need?”

Sometimes we wait for thunderclaps, drumrolls and clarion calls to alert us to what’s important when, actually, it’s most often the subtle and persistent signals around us that make the most difference.

Each of these has a definition; but more important, they each have profound meaning in your life.

A few thoughts about each.

Remember that as daily events conspire to cause you to forget it.

I’m sure that as you prepare to depart from Notre Dame the world outside these hallowed grounds may seem impossibly complex and irrevocably divided.

In the fourth century Saint Augustine wrote this: “Bad times, hard times, this is what the people keep saying. But let us live well, and times shall be good. We are the times. Such as we are, such are the times.”

If Augustine was right, as I think he was, then we must continue to grow in faith to be equal to the times.

As of today, you are part owners of the greatest nation on the face of the earth.

I am the grandson of four Irish immigrants and a military leader of 41 years who has served, lived, and built relationships around the world. I report to you today that the America l know is strong, and it is admired, sometimes begrudgingly, but among freedom-loving people, we remain the partner of choice.

America is the world’s engine, but also its conscience. We are the petri dish of diversity and inclusiveness. To channel Sinatra once more, if humanity can make it here, it has a chance to make it anywhere.

We’re not perfect, but I believe we try harder than others to be perfect.

We need you to have a warrior’s heart, an immigrant’s spirit, and a servant’s soul.

In our own tumultuous times, we need your genius.

Today you leave Our Lady’s University with everything you need to be leaders of consequence wherever life takes you.

Today you leave this beautiful campus armed with a diploma and an identity. You are now part of a brand that is widely recognized, that is much respected, that generates high expectations and that represents a brother and sisterhood unlike almost any other.

Yeats penned this about his own life: “Say where man’s glory most begins and ends and say my glory was I had such friends.” I challenge you to make each other proud in the future as you have in the past.

The end of the beginning of your education is at hand.

We can’t possibly know what will come next for you. History will find some of you but not all of you. Because you can’t know which of you will make history, you must do your best to be ready.

Be ready for God, Country, and Notre Dame.

As you continue your journey, I wish you a felt life.

And as you lead lives that are “felt,” I offer you one last piece of advice.

I had 32,000 soldiers with me in Baghdad in 2003 and 2004. Our job was to provide a safe environment within which Iraq’s political leaders could restore confidence in their government and reestablish basic goods and services like sewage, water, electricity, and trash.

As that proved more and more difficult, an insurgency emerged, and we were among its targets.

We began to take casualties in August of 2003, and we tried to remember our losses in two ways. We would begin each day with a morning briefing, and at the start of the briefing we would display the soldiers’ name on the large screen at the front of the briefing room and pause for a moment of silence. Soon thereafter, we would hold a memorial service with the soldiers’ teammates at their forward operating base which were spread across Baghdad.

You’ve seen images of these memorials. A small wooden box, an inverted rifle topped with a helmet and the fallen soldier’s dog tags over a pair of boots.

And one or two of his peers, his surviving teammates, would present a eulogy. And then “Taps” would be played.

These were heart-wrenching experiences.

Following the ceremony, we would all pass down the row of the soldier’s teammates to render our condolences and provide encouragement. You could see in their eyes that these young soldiers felt both fear and guilt: Fear that they had to go back out again and guilt that they had survived and their teammate had not.

In those early days, and for the first couple of these ceremonies, I simply couldn’t find the words to help either myself or these young warriors.

And then one early morning — in that spiritual period between asleep and awake — I found the right words.

From that point on, at each of these ceremonies, I would shake the hand of the surviving teammates of our fallen and tell them simply “make it matter.” They knew what I meant.

It has since occurred to me that “make it matter” is a phrase with meaning in each of our lives, regardless of our occupations.

And pretty soon it will be the sum total of your life that has mattered not any one particular accomplishment.

I know we will make it matter.