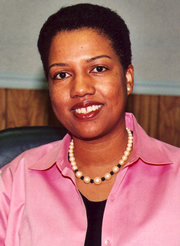 Michele Lezama is on the move, both in her work life and in her office location. As executive director of the National Consortium for Graduate Degrees for Minorities in Engineering and Science, Inc., known as the GEM program, she travels the country three days a week recruiting students and seeking program support. Her office onEddy St., just south of the Notre Dame campus, soon will be torn down for redevelopment, and in early summer the program will relocate into new on-campus quarters in Brownson Hall.

The GEM program, which celebrates its 30 th anniversary this year, enables minority students including African-Americans, Hispanics, Native Americans, Mexican Americans and Puerto Ricans to pursue masters degrees in engineering, as well as doctorates in engineering and the natural and physical sciences.

The origins of the program are well documented. It began with a call from Ted Habarth of the Johns Hopkins Applied Physics Laboratory to his friend and colleague Rev. Theodore M. Hesburgh, C.S.C., who happened to be in a restaurant inPeruat the time.

Universities, Habarth thought, needed to be making a contribution to theU.S.workforce by providing access to graduate education for minorities, given the increasing need for research and innovation in technology.

It was before the dot-com era, before the iPod,Lezama says.But it was a time when people like Father Ted knew that there was talent in the country that was not being tapped.

The message the GEM program wants to get out, Lezama says, is that a graduate degree is achievable and accessible for minority students.

The program exists today because of Father Teds vision and commitment,Lezama adds.

The program is housed at Notre Dame, but the consortium includes 94 institutions, including the Georgia Institute of Technology,Princetonand Yale. GEM fellows receive a tuition remission from the university they attend, as well as a stipend provided by corporate funding. The lengthy list of corporate employers and sponsors includes Abbott Laboratories, Apple Computer, Los Alamos National Laboratory and Raytheon. The program also includes a summer internship, which raises the total award package to $20,000 to $60,000 at the masters level, or $60,000 to $100,000 at the doctoral level.

Since it was founded in 1976, the program has graduated more than 2,500 students from many of the top universities in the country. Lezama, who holds a masters degree in engineering and business administration fromColumbia, is one of those graduates.

I received that degree because the director of the Notre Dame program personally recruited me,she recalls.He met with my mother and grandmother in a restaurant inNew York City, and said, Your child is too talented not to go to graduate school.

Lezama took the job of executive director late last year, she says, because of her commitment to GEM.I really wanted to make a difference in the next generation of graduates from the program.

Currently, she commutes from her home inAlexandria,Va., spending three days a week on the road and four days at home with her two young daughters. One recent week included a trip south to give a keynote address at theUniversityofArkansason theU.S.competitive disadvantage in engineering and science. Then she was off forOrlando,Fla., for a speech and two workshops at a meeting of the Society of Hispanic Professional Engineers.

Of her goals for the future of the program, Lezama says,I really want the consortium to be involved more programmatically in communities, by being involved in science fairs or technical symposiums. We want to engage in advocacy, to influence government funding in research, and to impact math and science education reform.

By doing so, Lezama believes, the program can help ensure that our nation stays competitive in math and science, and that American children can look forward to viable careers in science and technology.