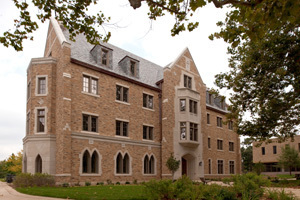 The 65,500-square-foot home of Notre Dame’s Center for Social Concerns and Institute for Church Life, Geddes Hall achieved all 42 LEED NC 2.2 credits originally sought at the outset of the building’s design.

The building opened in August 2009 and includes many sustainable design and construction features.

Geddes Hall is the first building to be LEED certified at Notre Dame. Other completed buildings pending final certification review by the USGBC include Ryan Hall, Stinson-Remick Hall, Purcell Pavilion and Innovation Park at Notre Dame. Buildings currently being designed that will eventually seek LEED certification at the conclusion of their construction include the new ice arena facilities, the Stayer Center for Executive Education, and new facilities for the Alliance for Catholic Education.