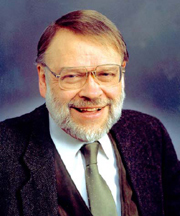 David Pearce Snyder, life-styles editor of The Futurist Magazine, will deliver a lecture titled “Extra-Preneurship: Managing to Prosper in Revolutionary Times,” at noon Friday (Sept. 3) in the Jordan Auditorium of the Mendoza College of Business at the University of Notre Dame. A part of the Donnelly Lecture Series on Employee Participation, the lecture is free and open to the public.p. Snyder is a data-based forecaster whose thousands of seminars and workshops on strategic thinking have been attended by representatives of Fortune 500 companies, local and federal government agencies, educational institutions and trade associations.p. Prior to entering private practice as a consulting futurist in 1981, Snyder served as chief of information systems and senior planning officer for the U.S. Internal Revenue Service, where he designed and managed the services strategic planning system. He also served as a consultant to the Rand Corporation and as an instructor for the Federal Executive Institute, as well as for congressional and White House staff development programs.p. Snyder earned his bachelors degree in government from Antioch College and his graduate certificate in operations research/systems analysis from the University of California, Irvine. He has published hundreds of studies, articles and reports on the specific futures of a wide range of U.S. institutions, industries and professions, and on the socio-economic impact of new technologies.p. The editor and co-author of five books, including “Future Forces” and its sequel, “America in the 1990s,” Snyder serves on the editorial board of On the Horizon Magazine and on the board of directors of the Academy for Advanced and Strategic Studies in Washington, D.C. He has made television appearances on Nightline, Today, CNN, MSNBC and the BBC World Service.p. The Donnelly Lecture Series in participatory management was inaugurated in 1988. Funded by a gift from the Donnelly Corporation, the series is intended to further the aims of John F. Donnelly Sr., a former president and chairman of the board of the Donnelly Corporation, who hoped to expand the frontiers of participatory management. The Donnelly gift supports the lecture series and a course devoted to participatory management and the acquisition of library materials on the subject.p. Contact: Robert Vecchio, Franklin D. Schurz Professor of Management, 574-631-6073, vecchio.1@nd.edu p. p.