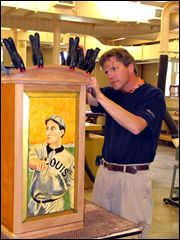 Robert Brandt just sent to the Chapman Friedman Gallery inLouisville,Ky., a cabinet made from curly-maple wood, cut to show off tiger-stripe patterns in the grain.

With its hand-paintedpanelsreplicas of 1920s Ringling Bros. and Barnum&Bailey circus posterscurved legs, candy-striped awnings and tent-pole tops, the cabinet pays homage to theGreatest Show on Earth.

Each piece I do is something new,says Brandt, a faculty member in Notre DamesSchoolofArchitecture.It is not a reproduction of anything that exists. Creativity is key. I am an artist and sculptor before I am a furniture builder or craftsman.

Brandts personal design studio is in the basement of Bond Hall, along with the woodshop that houses theSchoolofArchitectures furniture design concentration. Part of Brandts agreement when appointed in 1992 by former architecture chair Thomas Gordon Smith was to maintain a professional presence within the school.

It is important for students to see my work progress,Brandt says.Along with the students, I take a pile of rough lumber to a finished project. In my studio I have got to set an example.

Student design projects use historical precedents, although all work must be of original design. Brandt promotes tried and true techniques such as creating stains by soaking pieces of steel wool or nails in vinegar.

I encourage and use the old processes until I am convinced something new is better,he says.I show students the past is relevant.

The concentration attracted only a handful of male students in its first two years. Brandt invited female students to take his class and today women make up more than half the students in the program.

And graduates are using their skills in the workplace. Heather Reilly von Mering, a 2003 alumna who now works for The Classic Group, Inc., a Boston-area architectural firm, says:Residential clients are always asking to have a piece of furniture to match their millwork. I use the construction methods (Brandt) taught me in the design and development of built-in cabinetry and other custom pieces.

Brandts work is on display at galleries not only inLouisville, but also inNew Orleans,Connecticutand throughout theMidwest, a showcase for his talent since his days as an undergraduate at theUniversityofSouthern Indiana. Though he did not start working with wood until his senior year, he won top awards for his first projects from juries at major craft exhibitions. It encouraged him to pursue a masters degree in wood sculpture fromIndianaStateUniversityinTerre Haute.

After experiments with deconstructionism and minimalism, these days Brandts work reflects the Biedermeier style (clean, simple lines often with whimsical styling seen in mid-19 th -centuryGermany) and other forms of the 1820s and30s, such asFrances Empire style,Englands Regency style, and this countrys Federal style.

One of Brandts pieces can cost $7,000 in a gallery, though patrons such as the Metropolitan Museum of Art inNew Yorkare willing to pay $10,000-plus for his commissioned pieces.

Brandt encourages shaping wood by hand. He explains:Students need to use carving gouges, rasps, files. They need to feel the wood to understand.

Student projects are on the Web at: http://architecture.nd.edu/academic_programs/furniture_design.shtml