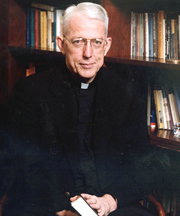 Organized by community leaders in the greaterSouth Bendarea, the event will begin with a reception at6 p.m., followed by dinner and a program at7 p.m.Former Indiana Gov. Joe Kernan, a 1968 Notre Dame graduate, will serve as master of ceremonies.

Net proceeds from the tribute will be donated at Father Malloys request to three local charities with which he has been closely associated – the Center for the Homeless,RobinsonCommunityLearningCenterand Boys&Girls Club of St. Joseph County.

In his 18 th year as Notre Dames president, Father Malloy will step down at the end of his current term, June 30. Under his direction, the University has experienced rapid growth in its reputation due to substantive improvements in the size and scholarly credentials of its faculty, the academic quality and diversity of the student body, and its financial resources and physical infrastructure.

Father Malloy is a professor of theology and, throughout his presidency, has continued to teach. Ordained to the priesthood in 1970, he holds three degrees from Notre Dame and a doctorate in Christian ethics fromVanderbiltUniversity.

Father Malloys academic concentration on the interplay of personal morality with public policy and professional ethics informs his own active public life. He is a leading advocate of volunteerism and has served on numerous boards dedicated to community service, including Campus Compact, Boys&Girls Clubs of America and the Points of Light Foundation.

Early in his presidency, Father Malloy played a pivotal role in founding the Center for the Homeless, which has become a national model in how communities deal with homelessness. More recently, he led Notre Dame to establish theRobinsonCenter, a community-driven education center in the Northeast Neighborhood adjacent to the campus.

Father Malloy also has worked to combat substance abuse through service to the National Advisory Council on Alcohol Abuse and Alcoholism, the National Center of Addiction and Substance Abuse and other organizations.

After stepping down as president, Father Malloy, who will turn 64 in May, plans to take a sabbatical, followed by a renewed commitment to teaching, writing, pastoral ministry and service on boards of various not-for-profit organizations.