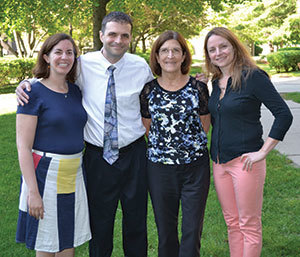 Nancy Fulcher, formerly assistant director of procurement, recently retired after 25 years at the University of Notre Dame. When she applied for her first job, she didn’t even have a résumé. “A friend in physics called and said they must need people in purchasing because they’re six weeks behind. I called Bob Watkins — he was a little offended that people thought they were behind. But I went in and met him, was hired and started the next day in a temporary, entry-level job. And I worked my way up.” Notre Dame is a phenomenal place to work, she adds, “and the people are great. The mission and the people, that’s what makes Notre Dame great.”

Nancy’s son (and oldest child) Matthew Fulcher ’95, MSA ’02, assistant director of facilities and academic space in the College of Arts and Letters, has worked at Notre Dame for 18 years. His first position was in Student Activities as operations manager of LaFortune. Later he worked for eight years in the Mendoza College of Business as the first operations manager of Giovanini Commons, a creative learning center.

Matthew met his wife Kathleen Fulcher ’99, when the two were working during Commencement Weekend 2001— Matthew was working for Student Activities, Kathleen “in pigtails and overalls,” was working for catering. “When my parents moved me up here from Cincinnati in 1995, they never got me back,” Kathleen says. “Little did they know.” Kathleen is program manager for Alliance for Catholic Education teaching fellows. They’re parents to two boys and a girl.

Daughter Rachel Fulcher-Dawson, the second oldest child (and parent of four daughters), is associate director of the Wilson Sheehan Lab for Economic Opportunities in the Department of Economics and holds a concurrent teaching position in Education, Schooling and Society in the Alliance for Catholic Education teaching early childhood policy. She’s a graduate of Marquette University in Maryland, and Michigan State.

“I left here thinking I would never come back, but came back 15 years later, and it’s been great for me and my family.”